CBS unleashed an extended 6 minute FIRST LOOK for the upcoming Fall TV Series SUPERGIRL. The trailer already has over 11 million views on the official YOUTUBE Channel since its debut last week.

DC Comics has more success on the small screen than Marvel thus far – from SMALLVILLE to the currently airing ARROW, GOTHAM and THE FLASH. This new SUPERGIRL series looks to continue that trend.

It looks like this series’ tone shifts between humour and superhero action. The series makes a wise move by aiming to attract more of the female demographic. There’s a hungry audience out there, dying to be represented. Like the lesson we learned this past weekend as PITCH PERFECT 2 easily beating MAD MAX: FURY ROAD at the box office… Hello?!

The extended preview made it clear that DC is hoping to draw young girls, teenagers, and young professionals.

While the trailer begins on Krypton, it quickly shifts scenery to Metropolis. The tone shifts as well, from drama to comedy.

Cut to: Kara Zor-El (newcomer MELISSA BENOIST), cousin of Kal-El (a.k.a. Supes), as an office assistant fully decked out with a wide-rimmed pair of Clark Kent glasses.

She’s a clumsy unassuming office worker with hidden alien superpowers who’s looking for love in all the wrong places.

The early moments with alter-ego Kara at her job is like a mash up of UGLY BETTY meets THE DEVIL WEARS PRADA.

Our dismissed and submissive hero works under the ruling of a domineering power-hungry boss, portrayed by CALISTA FLOCKHART.

Flockhart’s casting is nerdy interesting because of the irony of Kara portraying an almost ALLY McBEAL aloof goofball in the office. Flockhart was totally captivating in her starring role on that hit series.

It looks like she’s ready to chew up the scenery on SUPERGIRL as well.

After Kara leaped into action to save a plane from crashing into Geneva, media attention blows up. Images of this superhero rescue goes viral. #SUPERGIRL is trending.

At work, Kara addresses what some of the audience is thinking. Why Super-girl and not Super-woman?

Flockhart’s clever rebute puts us in our places:

Flockhart won’t get the only laughs either. Kara will have a lot of physical comedy, and awkward fish-out-of-water type jokes. This Kryptonian isn’t so well versed in her powers yet.

One of the best quips was when she hears about the Geneva plane. She says, “I can fly… I think I can.”  Kara then proceeds to leap, farther and farther, until she’s in flight.

There was a good follow-up joke when Kara realized how ridiculous her rescue attempt is, saying, “Oh, come on.”

SUPERGIRL seems like it will keep things campy, and not lose itself in the drama. Is this a lesson learned by DC from the disappointment surrounding the recent MAN OF STEEL?

An office co-worker looks to keep the mood light. At first he hits on Kara, and assumes she must be “a lesbian” since she didn’t fall for his charming ways.

The best sequence with him involves costume designing. We see a quick montage of several different iterations of the Supergirl costume – from the comic book spoofing scantily clad supermodel version, to the traditional caped costume.

These two even discuss the merits of a cape, delivering a few laughs. Turns out a cape does help with aerodynamics in flight – it doesn’t just look cool. But it keeps getting damaged with each saving of the day, Kara needs a solution.

Go figure, Jimmy Olsen has the answer. It turns out Olsen is the connection between Kal-El and Kara. He gives her the Krypton blanket that will serve as Supergirl’s indestructible cape.

Kara is certain to point out it’s not an S, but the sigil for The House of El.

The biggest question is: Which storyline will SUPERGIRL focus on? Will the office get more screen-time than Supergirl?

It looks like the action elements are varied, from the airplane rescue to the “car chase… I can do a car chase.”

The trailer also highlights a few moments with escaped alien inmates. Perhaps these super-powered criminals are from Krypton like Zod?

While I’m not the target demographic for SUPERGIRL, this extended preview was really intriguing. It already looks better than stuff like GOTHAM and AGENTS OF SHIELD, which I found rather disappointing.

The surprising lighter tone of SUPERGIRL is one the most intriguing elements. Calista Flockhart is a proven dynamic presence playing against type. 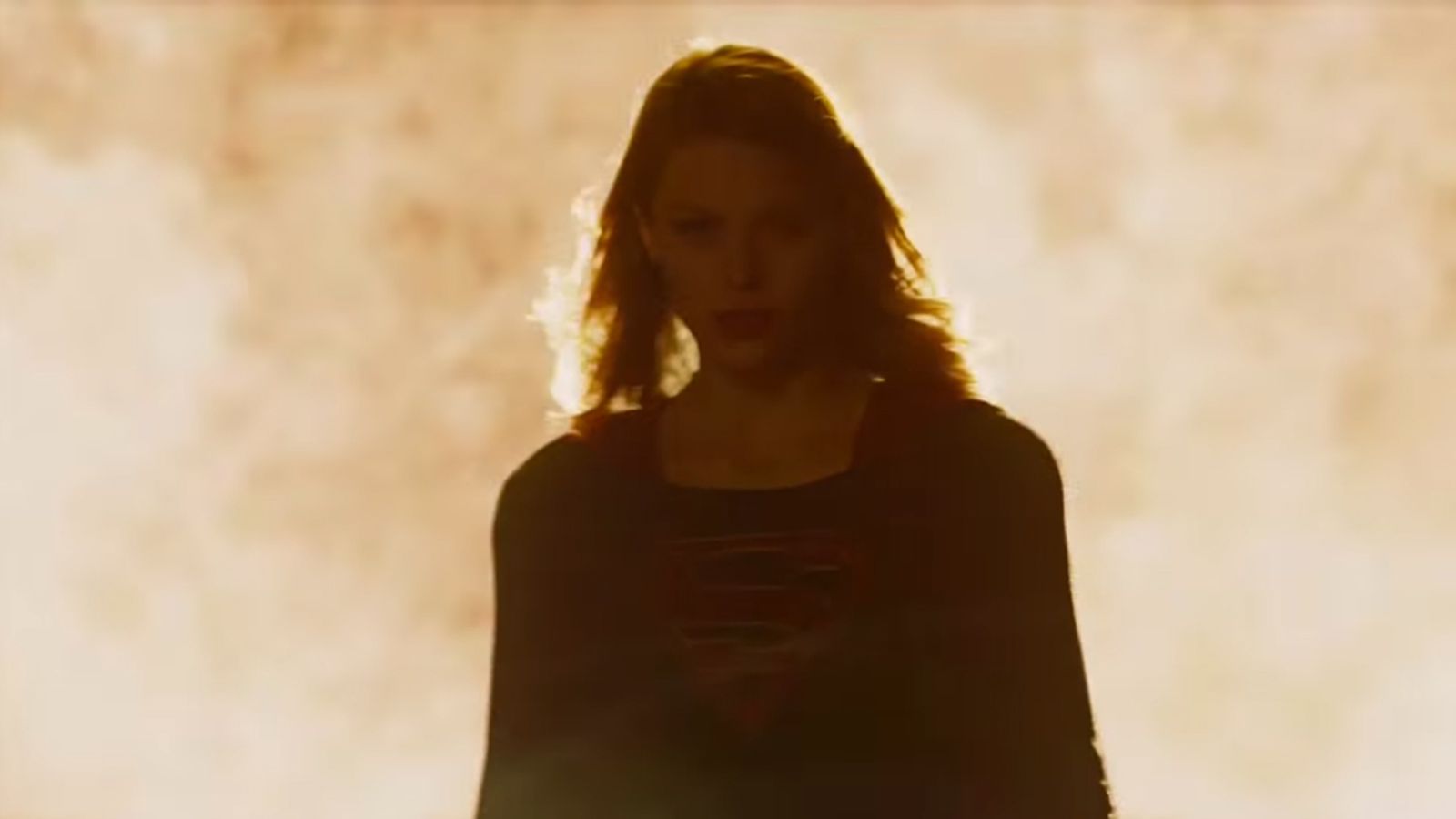 The comedic touches are a welcome bonus to a superhero series. It means the show will be fun. Let’s just hope the action sequences are NOT limited.

It looks like SUPERGIRL will be a big hit spanning across several audiences.

Will there be cross-overs with other DC shows on different networks?

Will SUPERGIRL stick to the comic book storyline?

Read my review of the Season Premiere.