SUPERGIRL isn’t just for girls. This action-packed pilot episode was amazing. What a way to kick of a new series!

While there are a few standout superhero shows on right now, like DAREDEVIL and THE FLASH, a lot of these comic book series really miss the mark for old school fans.

The series premiere moves along at a fast pace, blazing through a Planet Krypton opening, setting up the entire story, and squeezing in an epic plan crash rescue all in before the first commercial break. Now, that’s a hook!

The first episode latches onto the viewer immediately, following all the way through to the end.

The Krypton opening is focused on a young Kara (before she becomes Supergirl) and her Mother. The sequence is like a fast forward version of THE MAN OF STEEL’s intro. Shuttled away from her exploding home planet, her space ship is rocked off course, entering the Phantom Zone. This strange dimension is like a prison for Kryptonian villains. Time doesn’t pass here.

Originally, Kara was sent to Earth to protect her young cousin, Kal’El. By the time she actually arrives, he is already Superman – the costumed hero known by the world.

The Man of Steel places her under the guidance of scientists who will raise her. As a wink to the SUPERMAN legacy, Kara’s adoptive parents are played by Dean Cain from the LOIS & CLARK cult classic TV show, and Helen Slater who played the original SUPERGIRL in the 80s movie.

Superman makes some brief appearances, mysteriously photographed by the director as a mythic figure. Really, this is Kara’s story. The episode appeases fanboys with the Caped One’s cameo, but really the goal here is to establish our hero’s origin story as she becomes SUPERGIRL.

Melissa Benoist as Kara / Supergirl is conversely adorable and strong. She plays the affable and awkward goofball at the office so well it nearly rivals Christopher Reeve’s Clark Kent. You get the sense she isn’t really embellishing the clumsiness or aloofness – she actually IS like that.

The story follows the familiar path of Clark Kent’s, as Kara tries to blend in and lead a normal life. She hasn’t grown up practicing her powers or saving people’s lives. Kara is simply a lowly office worker, an assistant to a hard-nosed boss.

Benoist commands the screen, swinging from meek and shy, to strong and powerful. So far, Benoist is very convincing, making us believe in her struggle as much as she makes us laugh and root for her to save the day. The opening sequence blazes through setting up the story. It doesn’t move so fast you get whiplash, it just cruises along hitting all the right notes. We also meet Kara’s sister, Alex, who helps her hopeless sibling pick out an outfit for a blind date before she rushes off to catch a plane. She will play a much more pivotal role as the story progresses.

Kara’s date doesn’t turn out so well, the guys just isn’t interested. That’s a good thing because Kara notices breaking news on the bar’s TV: a plane is going to crash… her sister’s plane. Kara breaks her own code and sets out to save the day. She takes off, running into an alley. She’s a little rusty, like she says, “I can fly… At least, I think I can.”

This leads to a glorious action set-piece that is especially epic for the small screen. The special FX work is admirable. They shoot around their low budget (compared to a blockbuster film), creating an exciting sequence to kick off the series.

It’s only been 10 minutes into SUPERGIRL. Kara has already escaped an exploding planet and saved a plane from crashing with her bare hands. There is also a hint of self-aware humour which may continue to show up. When our hero realizes she’ll have to twist the plane to avoid a bridge, she makes fun of the situation, “Oh, c’mon!”

This review won’t recap the entire episode beat by beat, but will give an overall impression with some nerdy analysis.

The premiere is split between office work and superhero action. This structure should continue as the season progresses, so it is essential that the office scenes are just as interesting as the more comic book elements. Kara’s boss is played by Calista Flockhart (an awkward office goofball herself in ALLY McBEAL), delivering an acidic performance centered on comedy. Her domineering presence assures the office scenes will never be boring.

Flockhart is introduced with an elevator scene, which establishes her elitist qualities aimed to make us laugh. She confidently prances into her own office, as Kara waits on her hand and foot.

Flockhart’s best moment is when she defends the headline of SUPERGIRL, asking “What’s wrong with -girl-?” She explains how she’s powerful and rich and beautiful and a girl. This cleverly comments on how social media probably asks the same question.

After the excellent staging is taken care of, like character introductions and Kara telling her best friend the truth about her powers, we get a funny costume montage, and another action sequence.

Her friend helps design the costume, going through various looks, going from skimpy comic book attire to the final product – which is just plain nerdy cool.

A few good laughs come from the montage, like learning why a cape is important for aerodynamics, and how to make it damage proof.

The montage also shows Kara joining forces with her buddy, checking police scanners for criminal activity. Her first mission: a car chase. Kara hilariously affirms, “I can do car chases.”

The next big action sequence comes at the end, when Supergirl takes on a Shadow Zone villain – super strong like her and wielding a powered up axe.

Turns out her sister, Alex, works with a secret government agency that tracks aliens – like Kara. Supergirl is warned that this fight against Kryptonian Paul Bunyan won’t be easy. Our caped hero arrives on the scene like a bad ass, ready to rumble. 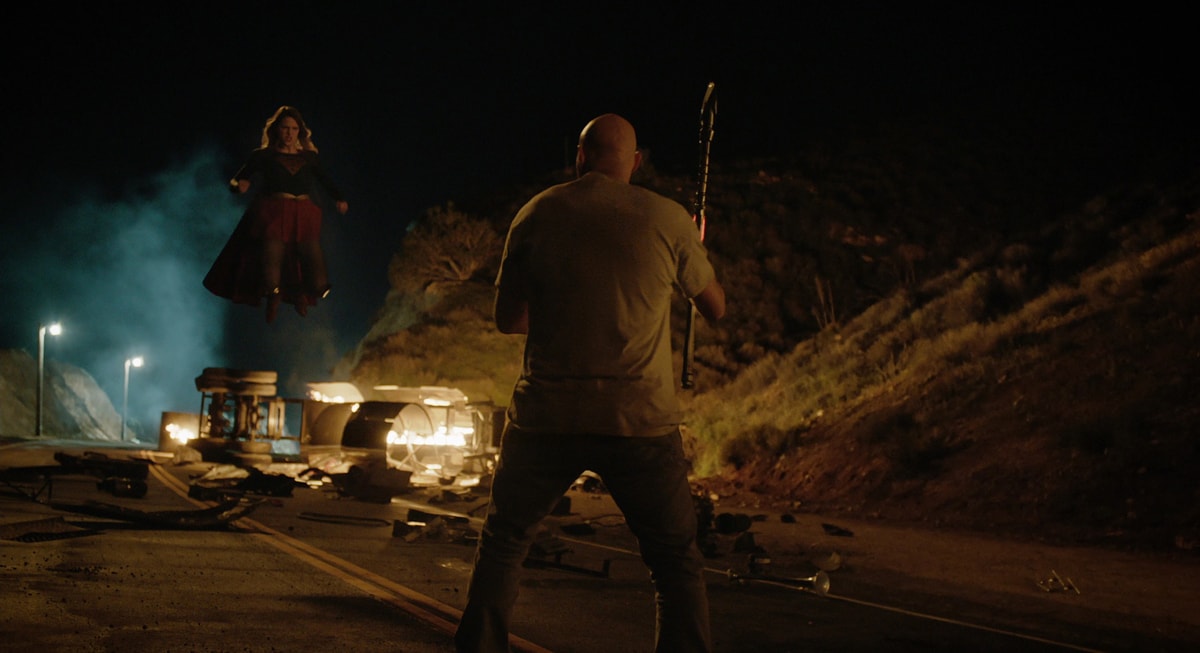 When it gets down to it, Kara takes Alex’s advice to heart. She needs to believe in herself to unleash her full potential. Supergirl unleashes alright. She uses her laser eyes to blow up the Kryptonian battle-axe.

The best part  is when Supergirl punches the big bad baddie, rocketing him straight through an entire transport truck. This already feels like a comic book show done right, down to the super cool slo-mo walk in front of an explosion.

Supergirl is framed like a totally rad 90s action hero.

This was an impressive debut episode. All these elements work so well together, from the writing, acting, and directing. The action is really exciting, fueled by a triumphant musical score. While this is no John Williams (and what is?), the scoring really feels like a feature film’s.

The episode crammed in so much plot and character, like Jimmy Olsen (Supe’s old friend) who gives Kara her true Kryptonian cape, and the season’s (?) villain, Aunt Astra from Krypton – who wants the Earth for herself even if she must destroy her own blood.

Pilot episodes usually deliver the best a series can offer. Let’s hope the next episode continues to #trend towards awesome.

The premiere of SUPERGIRL is much better than other superhero shows out there like AGENTS OF SHIELD or GOTHAM. So far, this new show ranks up there with the excitement and enjoyment of DAREDEVIL.

Stay tuned for the review of Episode 2… Coming Soon. 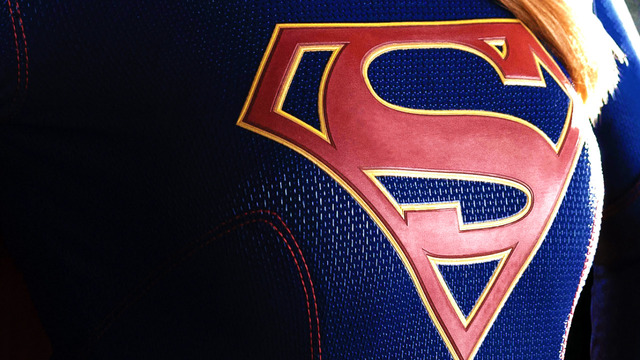 Or a more stream-lined analysis?