This was back in the day when Jolie was trying to break into Hollywood. She was taking risks, portraying daring characters. GIA tested her range as an actor with an impressive performance of an emotional arc, leading her to an EMMY nomination for this risque HBO biopic from 1998.

Reader Advisory… This review is intended for a Mature Audience.

In true biopic fashion we get glimpses of Gia’s early life where MILA KUNIS portrays the younger Jolie. MERCEDES RHUEL delivers a great performance as Gia’s mother. These sequences build a foundation for the present day. If these two characters didn’t work it would affect the whole film. These two actors carry the load in these flashbacks. FAYE DUNAWAY also appears in the present day storyline as a model manager or head of the model agency (I’m working off memory here).

The majority of the story; however, takes place in the 80s when Gia is a supermodel. We witness her struggle with the trappings of fame, and the allure of a glamorous lifestyle. These photoshoot sequences are filled with the energy of an action film. It truly is exciting. We understand how Gia could get addicted to this sort of high. The stage and the attention is so alluring.

Once she gets used to strutting down the catwalk and selling magazines as a cover girl she seeks out another way to get that high. All the hard partying catches up to Gia, with lethal consquences, as she contracts HIV. This cautionary tale is more effective due to its 80s setting. This was the decade we learned of HIV and AIDS. A lot of negative stereotypes plagued social idealogies. The public was misinformed or ignorant. The tragedy of Gia helped open up the discussion, as HIV was not inclusive to the gay male demographic. 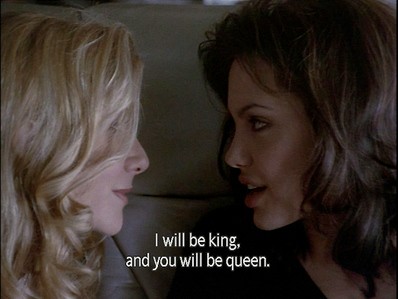 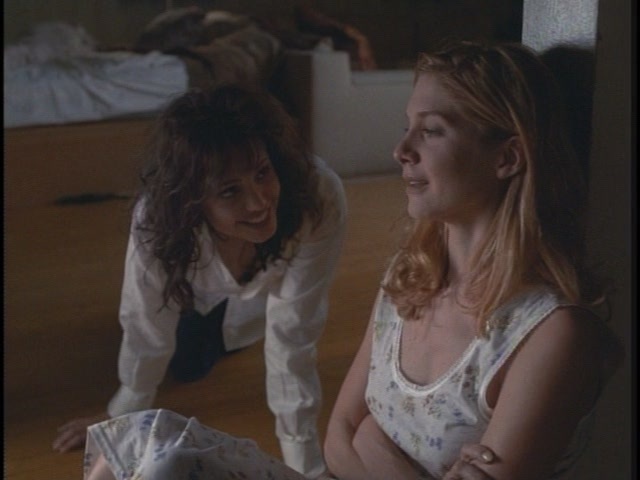 Along the way, we learn about Gia’s story. Her drive. Her emotions. Her love. Her flaws. ELIZABETH MITCHELL portrays Gia’s reluctant lover. Being Lesbian in the 80s isn’t so cool either. There are a lot of attrocious stigmatisms weighing on our characters in GIA. This relationship is handled beautifully on-screen and is a real focus of character and complex emotions. We have those pure gentle moments of love. The sensous act of love. And the sort of conflict that comes from this unique (for the era) relationship.

Angelina Jolie controls the screen. She’s magnetic and mesmerizing. She grabs your attention and never lets go. Sure we still get those moments of bad-ass attitude. At the time, Jolie was known just as much for her off-screen antics and dangerous persona – knife-weilding type dangerous. So, as a fan of her earlier roles, I expected this when it appeared on screen.

What floored me was the heavy emotional scenes. Jolie blew me away. I felt what she felt. I was totally on board. As a teenager at the time, I must admit Angelina Jolie naked was a big selling factor. I’m only human. But the emotional connection? It was not something my hormonally driven mind expected. It made this true story weigh so much. Seeing her love and lose love and all the inner conflicts then ramp up to the dangers of addiction and the knock out punch of HIV and dying from AIDS. It’s quite an emotional journey. A journey I’m glad Jolie took me on.

One of those scenes that combined both elements of emotion and eroticism infused with thematic subtext was during one of Gia’s photoshoots. Mitchell’s character assists the photographer. The stage includes a chain-link fence. Gia strips naked, baring all – including internal aspects.

Jolie smolders in this scene with feral intensity. She playfully combines combat with flirtation. The fence separates the two could-be lovers. The fence contains a smoldering attraction. A barrier between the two.

In a way, this visually represents the societal boundary. The photographer feels it’s wrong to be attracted to the model. Not because of workplace politics, but rather the outside world’s prejiduce. The two lovers eventually tear down the fence and consumate their attraction.

I’ve never seen love like this before. I never really considered what it’s like to be a gay woman. That’s what cinema can do. If done right. If carefully tended to. A movie can bridge a strong connection to reality, illuminating the world for the audience. Jolie and Mitchell’s abilities perfectly conveyed the internal in a sincere affecting way.

The love making sequences were truly sensual infused with passion and love rather than exploited for lust. These scenes were true character moments that sunk into the audience. It was actually quite an emotional relationship with its fair amount of conflict. There are intense moments of steamy sex which actually helps ground their relationship.

It  also helps us when we try and understand the disappointment Mitchell’s character feels, as her role shifts into a nurturer. She must wonder how she be Gia’s lover and mother at the same time. GIA is a lot more complex and in depth that you might consider at first.

The relationship reaches conflict. Mitchell’s character can’t set aside the feelings of others. She cares what people think about her. It’s so sad, because clearly she cares about Gia more than that. The confrontation between these two was handled with realism rather than melodrama. The whole film balances these two qualities rather well.

Gia’s downward spiral into drug addiction and self hatred is heart-breaking to watch. It’s hard to watch, but hard to look away. We witness  the descent, step by step. None of this would have worked without Jolie’s performance. This could have been cheesy and over-the-top. For me, Jolie was a revelation in GIA. All her subsequent performances are measured to this.

Jolie landed on my radar with her small role in the 90s cult hit HACKERS (left image above). The next film I enjoyed her in was the true story ensemble FOXFIRE about a female gang of outsiders. Jolie then grabbed everyone’s attention with GIRL, INTERRUPTED (on the right, above) earning her an Oscar attention.

Now-a-days Jolie is creating waves behind the lens as writer and director. Her latest effort was the impressive true story UNBROKEN, which was a financial and critical success. I hope we’ll see a lot more from director Jolie in the near future.

I feel like Angelina Jolie gets a lot of unfair criticism today. Sure she made some Hollywood films like TOMB RAIDER, BONE COLLECTOR, MR & MRS SMITH – but we must remember her earlier work. I’m mentioning it here just in case some of the younger crowd isn’t aware of films like GIA. And not everyone is a fan of her action films like WANTED and SALT.

It’s good to remember that before all the hype and the gossip stories Jolie was a bright rising star portraying sophisticated edgy characters.

To this day, GIA has to be one of the best performances Angelina Jolie has ever given. While this film might seem a depressing or daunting challenge, it’s worth the effort – especially if you’re a fan of independent cinema. Jolie’s portrayal of this real life figure is hauntingly effective. She helped me jump into the mind of Gia.

I feel like Jolie will continue to channel this same energy into the films she directs. I don’t think she’s into controversy for controversy’s sake any more. I think Jolie would rather provoke a discussion now-a-days and illuminate important causes. Her recent success with UNBROKEN almost guarantees another chance to direct.

I can’t wait to witness what Jolie’s future will offer us.

Do not let GIA – one of Jolie’s earliest best performances – SLIP THROUGH the cracks.

Have you seen Angelina’s Jolie’s other earlier work like HACKERS and FOXFIRE (above)?

Is Jolie’s performance in GIRL, INTERRUPTED her best?

Do you think GIA is too controversial?

Or did you find this biopic’s subject matter to be too depressing?

What do you think of Jolie’s work as a director?

Do you think Jolie should return to drama and seek another Oscar?

What did you think of this daring biopic?