* this article has gone gold*

Feminists unite… Tomorrow. We still haven’t seen a female led superhero movie. What’s up with that? Women make up a big part of the audience. So far they have BLACK WIDOW to cheer for. And… And? Anyone? Bueller? BUELLER?

We’ll get our first glimpse at WONDER in the upcoming BATMAN v SUPERMAN, setting up the eventual JUSTICE LEAGUE movie.

This article will dive into nerdy theories and casting rumours for CAPTAIN MARVEL.

I see WONDER WOMAN being cast as a relatively unknown actor as a benefit. For most of us, GAL GADOT will become the character. She is Wonder Woman. On the other hand, the hype machine relies on her performance in the upcoming BATMAN v SUPERMAN film. DC must approach this carefully to ensure a successful future with this legendary character.

CAPTAIN MARVEL is a character with superpowers comparable to the Man of Steel himself, SUPERMAN. She is an inter-galactic hero who saves the Cosmos, one planet at a time. The interesting part here, is that like Starlord, CAROL DANVERS (a.k.a. the new Cap) is Earth born. She is an Air Force pilot who gains her powers.

The casting for Captain Marvel is still underway. It’s up to nerds like us to put out theories on who should don the cape. Fan favourites range from KATIE SACKHOFF (BATTLESTAR GALACTICA) to KATHERYN WINNICK (VIKINGS – series) to NATALIE DORMER (GAME OF THRONES, MOCKINGJAY) to JESSICA CHASTAIN (INTERSTELLAR, ZERO DARK THIRTY).

My personal fav has always been indie-darling BRIT MARLING.

Whoever Marvel decides to cast, I’m sure they’ll be dipping into a pool of unknowns again. Marvel relies on their brand and history to sell tickets. I just hope they decide upon a multi-faceted actor for this pivotal role in the Marvel Universe. MARLING has already proved this in films like ANOTHER EARTH, THE EAST, and THE SOUND OF MY VOICE. She has magnetic charisma with a subtle mesmerizing quality. Her roles have demonstrated her handle on a range of emotions and character types. She’s also that rare combination of beauty and talent – extending into her screenplay writing.

Wonder Woman comes from Amazonia. She’s like a Greek Goddess. Much like Superman, she must try and fit in with the inferior homo sapien to hide her secret identity. She has super strength and the Lasso of Truth. I’m sure she’s got a few other ways to get guys to talk. But seriously, this superhero can be a true role model for a new generation. I’m thinking children are more likely to watch a movie, than find a comic to read.

The future of Wonder looks bright. She’ll be a main part of the JUSTICE LEAGUE, and she’ll get her own solo feature. I think a GAME OF THRONES director will helm that film. Does this mean it will take place in Amazonia rather than Metropolis? That would bring an almost THOR-like flavour to the DC universe. At its best, WONDER could be a modern-day adaption of the Greek Gods, steeping itself in its own rich mythology. 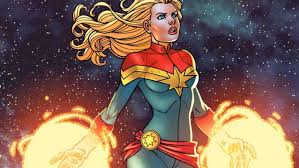 Danvers’ future looks just as promising, as she could easily fit into the same galaxy as the GUARDIANS. I’m sure she could appear in that sequel, and most likely in the INFINITY WAR team-up. Captain Marvel will keep the outer-space scenarios fresh by adding new blood. And she makes a most valuable super-powerful ally to Starlord and his crew. So who will come out on top? Which stand-alone movie will we enjoy more? At first, I think of the Marvel Fun Factor and I’m swaying towards CAPTAIN MARVEL. But I actually feel like DC has the upper-hand in this match-up. WONDER WOMAN has a deeper history to explore. The blend of Amazonia mythology gives it more of a unique flavour.

CAP might feel a little more familiar, genre-wise, and therefore a little easier to hop on board. However, I don’t think Marvel fanboys shoud dismiss WONDER simply because she’s from the other team.

Just 2 of the fan favourites above, Natalie DORMER and Katee SACKHOFF

Time will tell… I can’t wait to see a Trailer and get a better impression of these two superheroes. Let’s run down the CAPTAIN MARVEL casting… Who would you like to see portray this ultra powerful superhero?

What do you think of the WONDER WOMAN movie? Will it be set in the busy streets of Metropolis or in her mythical Amazonia? Which would you prefer?

What other movies would you like these heroes to appear in?

WONDER WOMAN will definitely get a boost from appearing alongside the iconic BATMAN and SUPERMAN before she debuts her solo movie. How large will Gal Gadot’s part be in the upcoming DAWN OF JUSTICE?

CAPTAIN MARVEL could see a boost from a possible cameo in GUARDIANS OF THE GALAXY 2?

What other Marvel film could Captain Marvel (shown as KATE SACKHOFF above) appear in?

What do you think of DC’s casting of Wonder Woman with GAL GADOT?

fanart / cosplay at its finest

Nerd Battle in the Comments Below…