Holy Mother of Dragons! What an amazing end to the episode. That’s two epic finales in a row for GAME OF THRONES. They sure know how to please the audience.

This episode was one of the more difficult to watch due to a certain character’s death and another controversial scene. Before we get into Daenerys and the controversy let’s dive into the other storylines.

Fear not, big Spoilers will be clearly marked later on. Tread carefully though, this review will recap storyline along with my nerdy commentary.

Let’s start with Stannis Baratheon… His armies rest in camps, as Melisandre quietly and ominously stares out into the night. Suddenly, the tents are set ablaze. An ambush. Some of Stannis’ men die. A horse gallops on fire. A haunting image.

Was this what Ramsey meant when he asked for “Twenty good men” last time out?

Or did Melisandre call on the flames with her powerful magic? How far will she go for power? I feel like she’s Cersei with lethal superpowers.

I think she made a move to convince Stannis to make her suggested sacrifice. She could have ulterior motives. By eliminating his daughter, he would lose another heir to the throne.

Perhaps, this ultimate sacrifice was a test of his devotion and proof of her ultimate control.

* the following review is intended for a MATURE audience *

Now Stannis needs the Wildling numbers more than ever. He was impatient and willing to march for Winterfell without them, but now he has no choice. He sends off the Onion Knight to convince Snow to send them, or force him to.

Before our loyal warrior goes off on his mission he brings a hand-carved Stag (the Barratheon sigil) to Stannis’ young daughter. I think if Stannis wants to sacrifice his daughter, this mission keeps the Onion Knight far away, too far to protect her or disagree with his devotion to Melisandre’s God.

Meanwhile, in Dorne… Mrs. Viper disrespects her brother-in-law by spilling out a toast to the Lannisters. The Ruler of Dorne threatens her later to not make the same mistake again.

Her venom is slow-acting. I fear for Jamie. She wants revenge bad. Bad enough to bend on her knees in front of Dorne’s Ruler. Taking to a knee is no easy gesture in GAME OF THRONES. Mance died for it, Cersei remains imprisoned for it.

But Mrs. Viper wants her little Sand Snakes free. She’ll need them for her plan of revenge. It’s worth the knee. 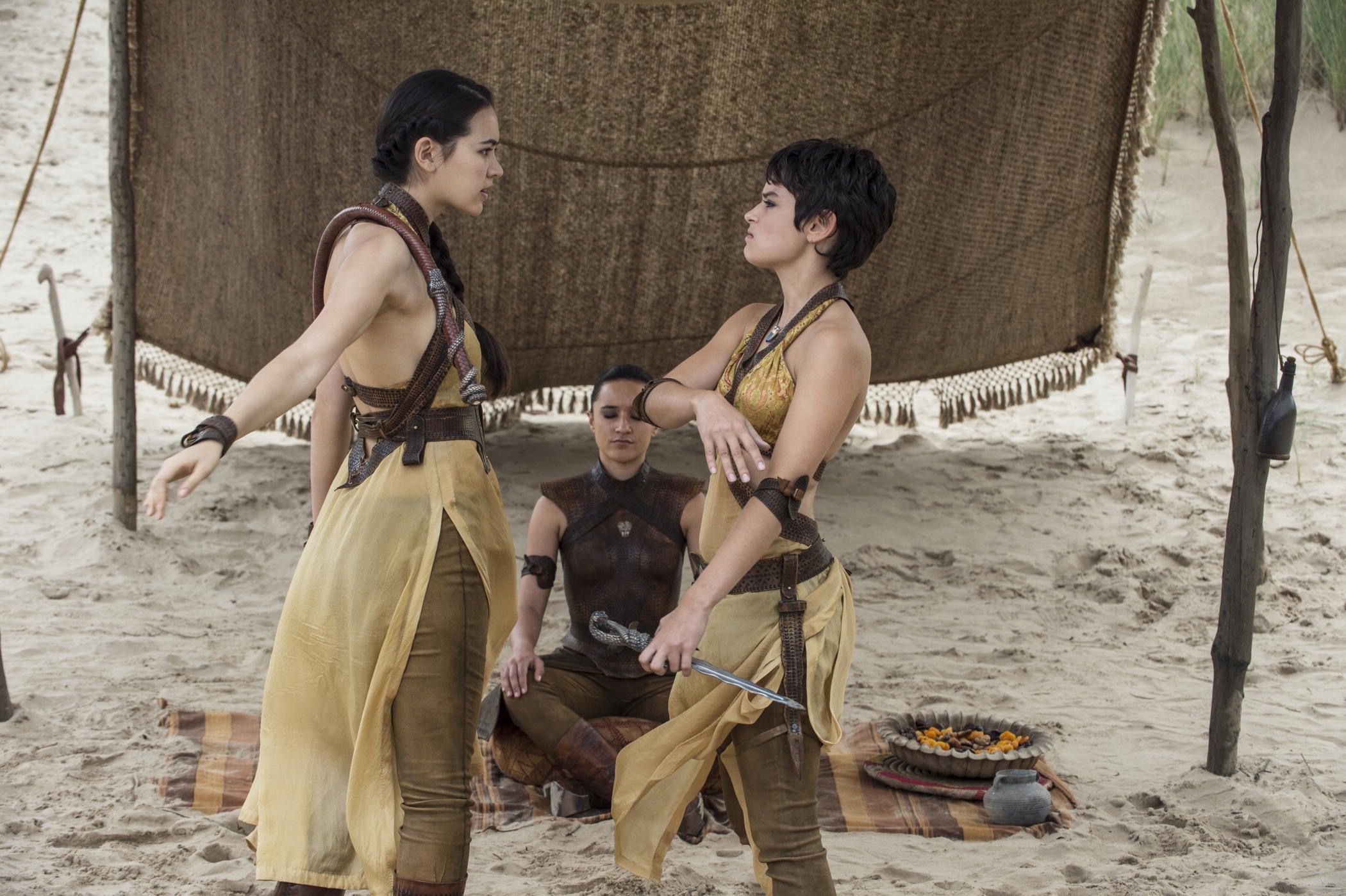 sibling rivalry… from an earlier episode

Tyene plays a hand-slap game with her sister. These Sand Snakes are competitive. Tyene distracts her with words, taking abuse, waiting for the perfect moment to strike. Looks like manipulation is part of their arsenal.

Before Bronn is freed from jail, thanks to Jamie’s negotiations, Tyene is sure to taunt him again, asking “Who am I?” He’s learned his lesson, Bronn reluctantly replies, “The most beautiful woman in the world.”

Meanwhile, in Bravos… Arya sells clams under the Shadow of the Colossus. Her mission from last time was to poison the gambling merchant on the pier. While there she notices Lord Tyrell arrive by ship. She follows him through town until his entourage stop at a brothel.

Perhaps Arya’s Master, Jaqen, knew Tyrell would arrive? Maybe he’s testing the young assassin to use her own judgement on striking the better target?

There was a really disturbing moment in the brothel where the swordsman wanted an underage prostitute. I was thinking Arya was going to kill him then. Maybe she’ll go undercover later and kill him in privacy? 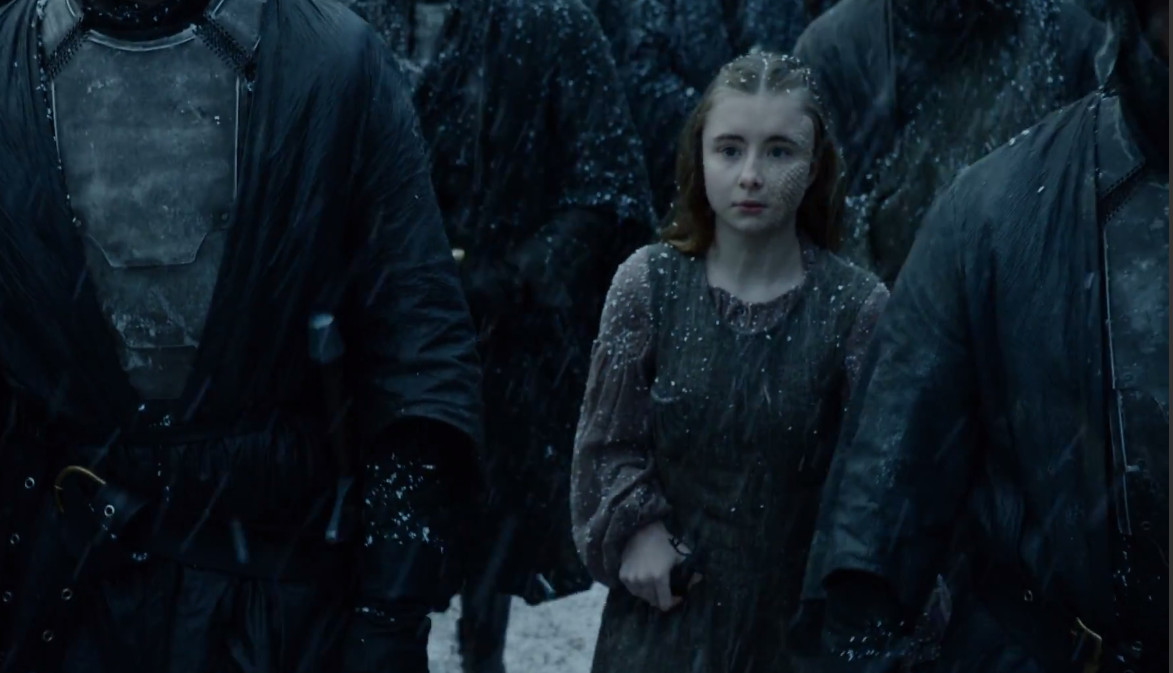 Back to Stannis… He tells his daughter a story, trying to explain ethics, and foreshadow what’s about to happen. She is oblivious. The scene is fueled by dramatic irony. It was heart-breaking and perfectly staged.

Her march along rows of guards was so eerie. Then it’s revealed she’s marching towards a stake. Once again, fire will claim a life this episode.

Stannis watches on, his wife agrees with the sacrifice. Once the flames are set she questions her devotion. This controversial scene was beautifully (tragically) photographed and the performances were layered. Stannis seemed conflicted, but his strive for power overcomes everything else.

I feel like Melisandre made another important move in this GAME OF THRONES.

Now, how can she possibly guarantee victory at Winterfell? Or could she always use her powers regardless of any sacrifice?

I think Melisandre has manipulated Stannis since the beginning. She’s playing the long con. Killing the impatient man with patience.

We’ll have to wait and see if my theory pans out.

Meanwhile, in Mareen… Onto the epic finale.

But first, what a striking transition. We went from the shocking and sad violence in the previous scene, to the over-lapped sound of the arena crowd cheering. We go from being depressed by violence, to being excited for violence.

I hate to admit, but the cheering made me think of gladiator fights, perking me up for a cool action scene.

I’m aware of this subtle manipulation and I love it. This helps us feel a bit more like Daenerys in the upcoming scene. She doesn’t want to see people killed in front of her. She isn’t entertained by violence. Like we weren’t in that previous scene with Stannis. This was simply a beautiful and illuminating transition.

The pit fighting sequence is where Jorah wants to repent for his betrayal to Daenerys. He’s willing to give his life for a chance at forgiveness.

So he takes on the whole arena, until he’s the last man standing. And then we get one heckuva twist for the end.

Jorah launches a spear Daenerys’ way… to protect her from an assassin. The Sons of Harpy ambush the arena. They start killing the crowd and storm for the Mother of Dragons.

Jorah, Tyrion, and Daenery’s lover protect the Queen and her servant. They form a protective shell around her. The remaining Unsullied, decimated from the Harpy’s earlier attack, also join in to protect Daenerys.

It’s isn’t enough. Hope drains out of our heroes. Until it returns with the thunderous sound of dragon wings. That’s right, Daenerys’ big bad dragon lands in the arena and takes out those Sons of Harpies.

And then the unexpected happens. Yeah, sure, the dragon stomps on some baddies, rips a few apart, burns a dozen or so, but then they fight back.

These Harpies are as badass as Unsullieds. They launch numerous spears, piercing the dragon’s hide. Hope drains out again.

I was really worried. It was like an E.T. Oh Shit moment, where I knew this fake creature I connected with was going to die. And I really didn’t want it to.

But then Daenerys finally realizes what the dragon’s waiting for. I don’t know if she has a telepathic link with the great beast, but she somehow knows what it wants. She hops on top and they fly off into the sunset.

So are Tyrion, Jorah, and the others screwed? Can they defend against the remaining Harpies? Is the dragon set to return and blaze them up? Or is the dragon headed for his homeland of Valaryia?

We’ll find out what’s up next episode. There are several other storylines that need to finish off. Maybe next episode will close-out Arya’s story?

Or we’ll learn what Sansa & Theon have planned? Or if the captives of King’s Landing (Cersei and Margaery) will be freed?

Will we find out if Stannis made a worthy offering to Melisandre’s God? Has she been manipulating Stannis since the beginning?

Was she making moves for power when she seduced him on the table map? It seems to symbolize how she will takeover the lands on that map.

I have a bad feeling about Melisandre, her deadly magic combined with her lethal intellect make her a worthy adversary in the GAME OF THRONES.

I can’t wait for the Season Finale next week. Tune in for the review… Coming soon.

THIS EPISODE: The Wall accepted the Wildlings