The imaginary world is filled with AVATAR levels of detail. I lost track of the number of strange creatures highlighted in this 2 minute trailer. And its an ecclectic bunch. There is such a variety of fairies, elves, goblins, and dark pixies. It doesn’t look like this will be too freaky for the youngens. I think atmosphere elicits fear more than creature design. Not as scary as LORD OF THE RINGS or GREMLINS.

While the hallucinatory visuals and imagination on display is a strong selling point for me, I feel like the jokes will really appeal to the younger kids. And there’s tons of them being fired left, right, and off-center. STRANGE MAGIC looks like good fun for the whole family.

Another lighter element is the musical approach. It seems like pop songs from the past few decades will be sung on screen. I liked this modern song stuff in MOULIN ROUGE, as well. For me, it’s better than the characters singing their thoughts & emotions.

A big draw for me is the involvment of GEORGE LUCAS. This movie was his idea. He’s guided some great family films from my era, like LABYRINTH and WILLOW. My hopes here is that MAGIC captures the same feelings as those fantasy-filled adventures.

Think of this one like Lucas’ spin on Shakespeare’s A MID-SUMMERS NIGHT DREAM. So expect romantic triangles gone wrong through manipulation of desires by aid of magical potions.  Stuff like she loves him, but he loves another her. They take potions to win the love of their respective romantic crushes. The elixir works by drawing the attention of the first person that sees you. Of course, not everything runs so smoothly. Timing is everything, right.

To touch on the technical elements for a second. Some of those close up shots looks eerily realistic. Like photo real. It makes me wonder if this will look better than a Pixar film? Some of the wider character shots made me hesitate, but those facial features upon closer framing are impressive.

Amazing details & atmosphere are on full display in this magical family adventure.

STRANGE MAGIC hits the silver screen on JANUARY 23. That’s really soon. This movie didn’t get your typical advertising rollout where you hear about it several months to a year before release. I appreciate this delivery method. For an “original” property it isn’t always necessary to promote so far ahead. We have short attention spans. The audience might forget about it. Or get sick of multiple trailers revealing too much footage.

Ironic isn’t it? MARVEL movies, for example, get marketed well ahead of release to tease us and build anticipation. Since we already know and love these franchises do we even need sneak previews for them?

I’m looking forward to George Lucas’ latest idea, STRANGE MAGIC. With a variety of creatures and tons of humour it looks like a fun day at the cinema. 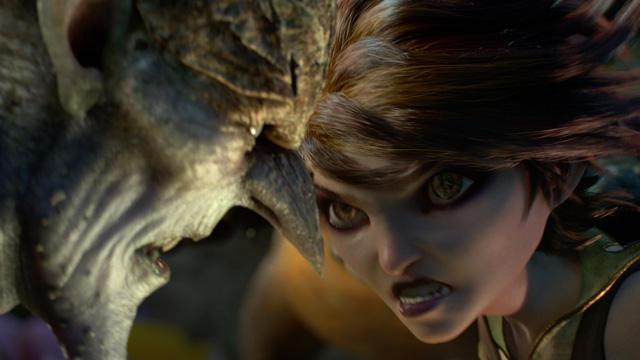 What do you think? Are you a big kid at heart who secretly enjoys taking the kids to see these movies? Do you watch it through their eyes?

What do you think of the musical approach? Would you rather they be original songs?

Wood in ACROSS THE UNIVERSE… CLICK the image to watch the TRAILER.