“His arrow was mercy”… Jon Snow sailed to the Wildlings, hoping to convince them to join the upcoming war against the White Walkers.

This episode of GAME OF THRONES was one of the best in the series’ entirety, with an action sequence rivaling Season Two’s Blackwater naval battle and the fight at the Wall last season (you know, the one deemed epic enough it got a theatrical IMAX release).

So I know it’s saying a lot… but I said it. Episode 8 easily rivals those others mentioned, if not toppling them down.

Before we get into what happened down in the Wild Wild North, let’s start at the start… with Tyrion and Daenerys.

Here’s a quick, very brief, refresher on their shared history.

See, it goes like a little something this, Daenery’s father was the Mad King and Jaime Lannister is the King Slayer who, um, slayed the King. And Tyrion is Jaime’s brother.

Tyrion is sure to tell Daenerys that he killed his father and his mother (in childbirth).

The Lannisters and the Targaeryan’s are both long standing very powerful dynasties, who never would have allied in the past. Well, the past’s the past, and the present is a “Gift”. Time’s change.

Tyrion spins the story as he pleads with the Mother of Dragons, “I am the greatest Lannister killer of all time.” Basically inferring to Daenerys, if you want to kill more Lannister’s, I’m your man.

There was some great dialogue in these sequences with Tyrion and Daenerys. The Imp always tries to lighten the mood / disarm his true power with a joke.

He playfully takes a jab at her, “You want the Iron Throne? Perhaps you should try for something else.” But Daenerys isn’t in the mood for jokes.

They talk of the Seven Kingdoms, and all the families vying for the Iron Throne. Daeny draws an interesting comparison, saying they’re all “spokes on a wheel.”

Tyrion continues to caution her on her aspirations for dominance, saying she’s “not the first person to have dreamt it.”

The real highlight is how Daenerys fires back at Tyrion, assuring him she isn’t near-sighted. She powerfully exclaims, “I’m going to break the wheel.” Wow. She’s basically inferring that she intends to be the last person to have dreamt for the Throne. For, it will be her’s.

Through his clever words and manipulation Tyrion spares Jorah’s life, convincing the Stormborn of legend to exile the betrayer instead of execution.

Daenerys agrees, going one step further and appointing Tyrion as her adviser.

from the previous episode

As the banished Jorah walks the city, I wonder if he was spreading the infection of the Stoneman curse he’s afflicted with? Or is the contagious aspect only prevalent in those who are fully transformed?

Later in the episode, Jorah approaches the pit master and offers himself for combat. He wants another chance to repent and impress Daenerys. He tells the medieval Don King, “Let me fight for her and I’m your’s.”

Hmm. Does Jorah have something up his sleeve? I mean beside that nasty scaly infection. Is he planning on killing someone else? Like Tyrion?

Meanwhile, with Arya… The young Stark continues her training to become nobody, with the face-shifting assassin Jaqen. Her first Away Mission is to pose as Lanna, an innocent market trader.

With her hair tied up all Princess Leia, Arya unassumingly navigates the marketplace peddling fresh clams until she arrives at her target: a merchant with a gambling problem.

As nobody, Arya can observe details and plans that she couldn’t otherwise. This faceless assassin business pays off.

Now when is she going to perch atop a tower and dive in a pile of hay (sorry, was that reference too nerdy)?

Arya returns from her recon mission. Jaqen provides his new assassin with a vial of poison. The music here was great, dark and moody, reminding me of Clint Mansell’s phenomenal ambient score to REQUIEM FOR A DREAM.

Next time this marketplace baddie wants vanilla on his clam, I’m thinking he’s going to choke like ol’ Joffrey.

By the way, there was a nice call-back to last episode there. Jaqen calls the poison, “A gift.” Um, like Tyrion? Does this foreshadow a possible assassination attempt on Daenerys orchestrated by the Imp (by way of Varys)? 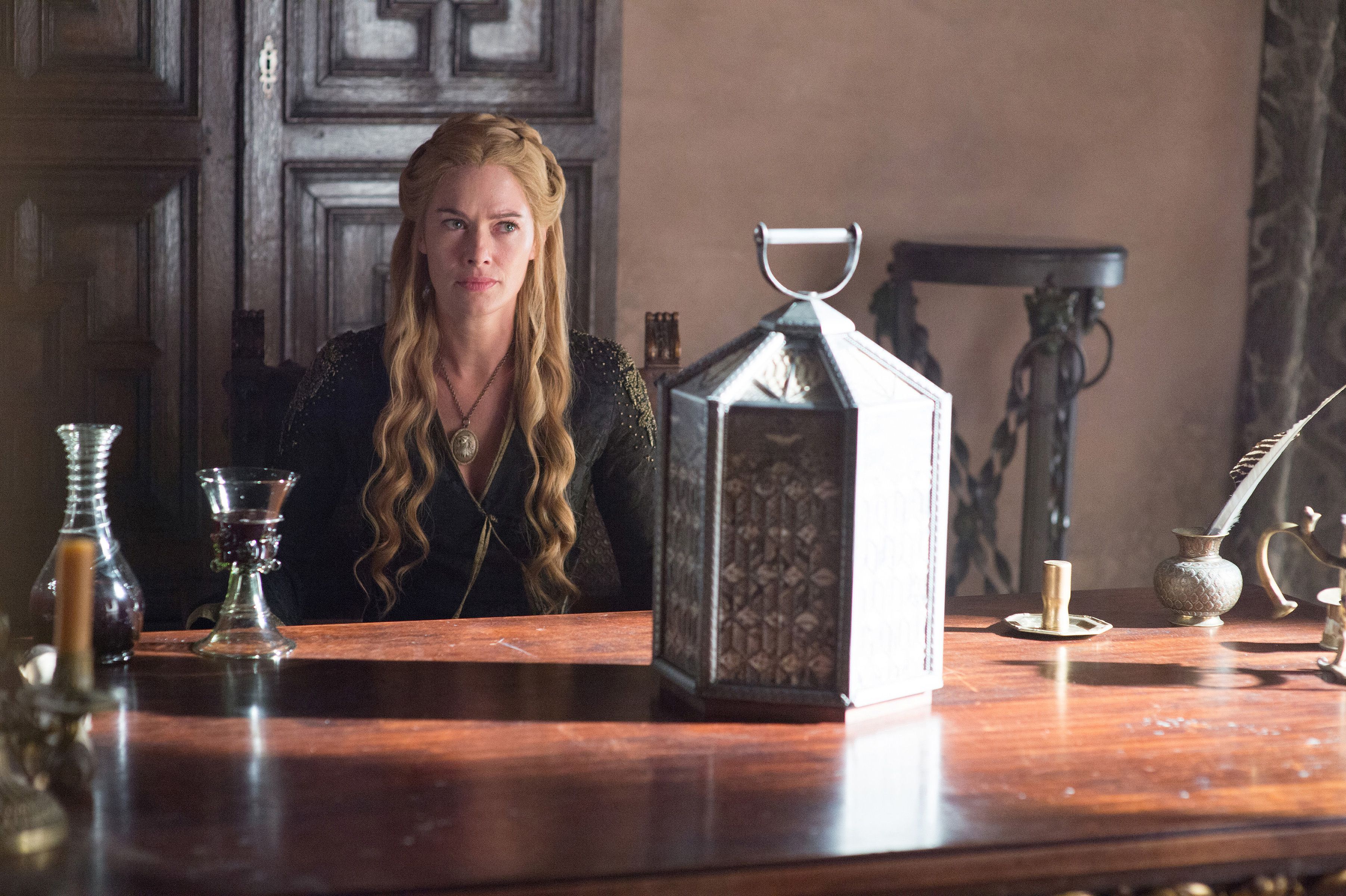 from an earlier episode… the irony: now Cersei is the caged viper

Meanwhile, in King’s Landing… Cersei is imprisoned for incest and murder of the King, her husband Robert Barratheon. But she hasn’t lost hope. She’s still driven by pride and the thrive for power. As she’s told, “There is a way out” – kneel to the High Septon (a.k.a. The Sparrow).

The Queen Mother is continually asked to repent and confess her sins by her religious zealot captors over the course of the episode. She never once relents. Even when she is denied water or food.

The last time she is asked to confess by her super-tall and imposing jailer (who must be Brienne’s cousin or something), the parched and fading Cersei still stands strong. She won’t give an inch. The jailer spills the water out. Denying Cersei any respite.

Once Brienne’s doppelganger exits, our proud and strong Queen Mother falls to the ground, clambering for the spilled water. Cersei brings her parched lips to the mud and finally relents (alone, and free of scrutiny), sipping up the dirty water.

Turns out in GAME OF THRONES, the worst thing you can do isn’t beheading a rival or poisoning an enemy. The worst you can do is ask someone to kneel before you.

from earlier episode… this time: no fake smile

Meanwhile, in Winterfell… Sansa finally confronts Reek, the Greyjoy who grew up with the Starks, asking him, “Why, Theon?” He coldly replies, “There is no Theon… There is no escape.”

Sansa, boiling with pain and rage, continues: “If I could do what Ramsey did to you, I would.” The broken man replies with a broken retort, “I deserved it.”

This intriguing conversation gets even more compelling as Theon confesses that he didn’t kill her brothers, Bran and Rickon. He killed innocent boys and tricked others that it was the young Starks. I think this revelation will help Sansa and Theon rebuild their fractured relationship.

Now that he’s confessed (a nice parallel to Cersei’s storyline), perhaps Theon can repent for his sins and helps Sansa escape Winterfell before the warring armies arrive. Hopefully, before the end of this season.

Briefly… The Boltons ready for Stannis’ attack. The elder Bolton is confident in their numbers and location. He prefers to wait out Stannis’ army. The patient ruler wants his enemies starve before there’s any Clash Of Swords.

His madman son, Ramsey – who wants to be the next Mad King – has a different strategy. A mysterious method of attack that requires “no army, only twenty good men”. Say what?! These final episodes will be full of conflict.

Speaking of conflict. Let’s finish this off with some talk about that super epic finale.

#WETHENORTH… Winter is coming, a little sooner than we thought. The red-bearded Captain Wildling sticks to his word. He wasn’t planning on an ambush with his people after all.

When Snow admits he killed their leader, Mance, the lead Wildlings are upset and want vengeance. But Ginger Viking stands by Snow, telling the truth, “His arrow was mercy.”

After convincing a mass of 5,000 Wildlings to join the cause and begin boarding the boats, curtains of snow stream over the village’s mountains.

This is where GAME OF THRONES went a little nutso. An ARMY OF DARKNESS spills over the hills and attacks. Good thing, the speech went well, and they’re already leaving.

Medevil dick-weeds totally ravage the village, busting through the city walls. These fights here were great, filled with intensity. And then it SPINAL TAP-ped, amping up the action to 11 – Jon Snow fights a White Walker, Wildlings battle zombie soldiers, and an enormous giant backs up our heroes.

This episode had a little bit of everything (um, minus boobs). Plus, we also learned that Valaryian steel makes the Walkers poof into dust like a vampire on BUFFY.

The final sequence with the Seven Horseman of the (Seven Kingdom) Apocalypse watching the battle sent shivers up my spine.

As our surviving Wildlings and Watchmen float away on ships, the Lead Walker with the Frozen Crown (a.k.a. icy Darth Maul) watches on shore, leering at our heroes as he raises his arms and magically raises an army of the undead. The fallen Wildlings join their ranks, like Snow feared they would.

With this grand battle full of Deadites, it looks like Snow’s storyline is completed for this season. We’re all prepared for next year’s defending of the Wall / Stannis & Melisandre’s storming of Winterfell.

an upcoming episode? Daenerys surrounded by Harpies… is this somehow connected to Jorah?

With only two episodes remaining, they should be jam packed full of greatness. Several intriguing chapters are set to conclude.

I can’t wait to see what’s been happening with some of the other characters we missed this time around, like the gang in Dorne and Brienne of Tarth in Winterfell.

What did you think of this character? Is she destined to be a Dead-Alive villain for next season?

What’s happening with our other characters? How will their season stories end?

When are we going to see more Sand Snakes? Are they planning a jail break with Bronn?

the creepiest moment of the episode… this is what they fight for, to save their children from a similar fate

The small things of history