Get your nerd on! It’s time to breakdown the weekly roundup of ‘consumed’ films and television.

Here’s a quick hit list with mini-reviews to help you decide what to watch this week based on what I watched last week.

Dig in and enjoy!

Some good energy. Some good laughs. Some good action. Unfortunately, it all adds up to mediocre. The story is a mess. A familiar approach like the SKWAD is formed to capture The Joker would have been more entertaining. The narrative ruins everything from the opening. A series of scattered flashbacks introduces us to each ‘hero’. Perhaps a more straight-forward intro would have launched it better (ie: show their captures without a narration or interrupted by flashback editing), saving the Amanda Waller montage dinner scene for the supporting characters. The POWER RANGERS Puddies are back, as the villain’s thugs here. The baddie stuff goes way out there, bringing too much supernatural to what should have been a more grounded and gritty superhero group. 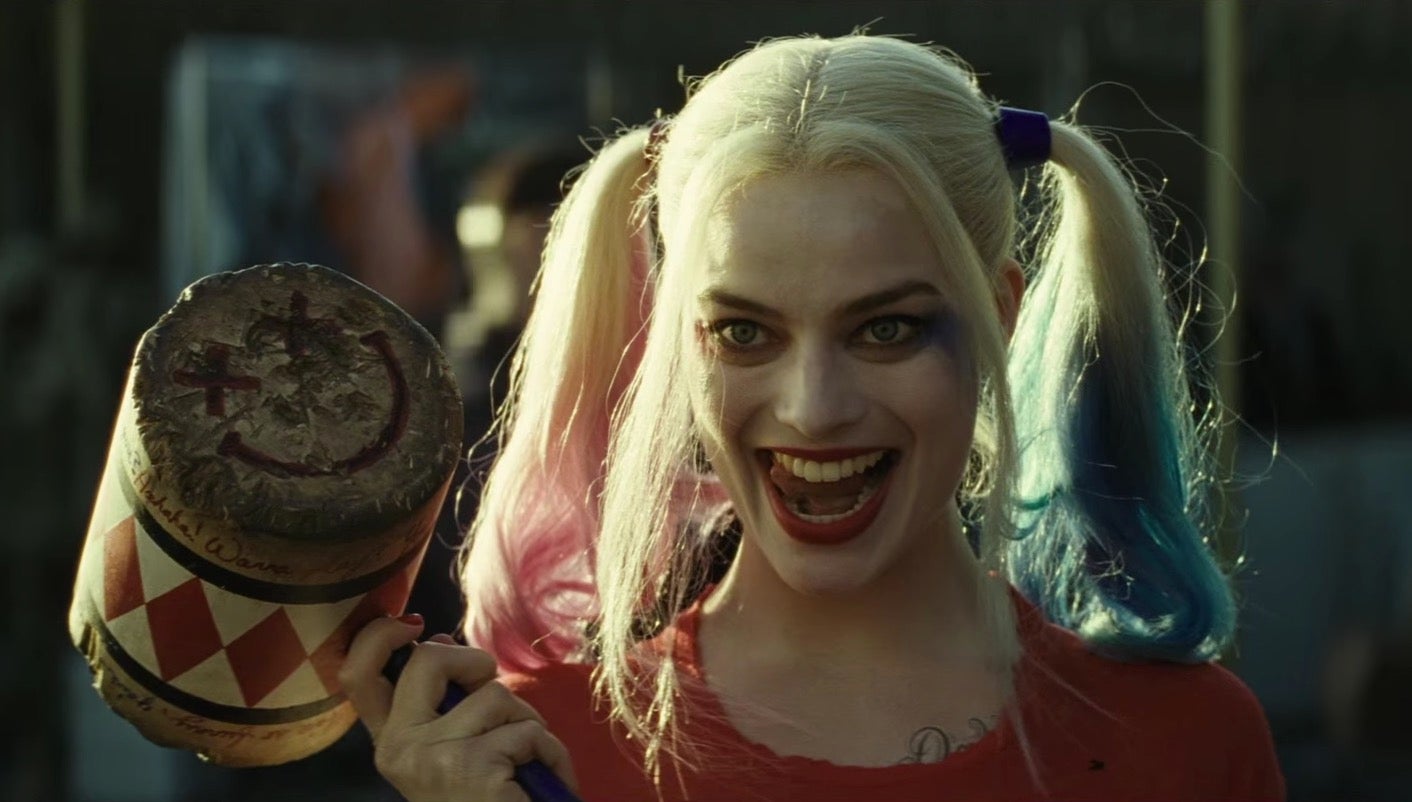 Margot Robbie as Harley Quinn steals the show. Too bad the film wasn’t more centered around her. With some tweaking, her storyline could have really worked well. Jared Leto’s Joker can’t compete with Heath Ledger’s, but that was expected. It’s also unfortunate Leto isn’t given more memorable scenes to work with. Will Smith’s character was the most developed but also never gets an impressive moment to shine. Unlike his hero Deadshot, the film misses the mark. Disappointing for a comic book nerd who just wanted to have fun with a popcorn muncher.

Oliver Stone’s biopic on Edward Snowden focuses on the man behind the notorious government leaks about spying on the nation. Stone lets the audience decide whether Snowden is a hero or a villain. Learning more about the mysterious figure is entirely compelling despite any political affiliation. Joseph Gordon-Levitt nails the mannerisms and voice of the real life Snowden. Shailene Woodley brings some impressive emotion to the story. While not as visually experimental as something like Stone’s NATURAL BORN KILLERS, there are still some astounding moments of stylization. Never boring, SNOWDEN burns at a steady pace mounting tension even for those familiar with the true story.

WOLF OF WALL STREET meets THREE KINGS. From the director of such comedic gems as ROAD TRIP and THE HANGOVER, comes a totally Scorsese vibing tale of true crime. Miles Teller and Jonah Hill star as arms dealers who work with the Pentagon to deliver bargains on guns and ammo. While the characters clearly emulate SCARFACE (written by SNOWDEN’s Oliver Stone), this film isn’t as violent or as provocative; however, WAR DOGS is just as captivating. A character-piece at heart, this drama blends some comedy and thrills without losing sight of its themes. For me, this was a more impressive turn for a so-called ‘juvenile’ comedic director turned dramatic helmer than BIG SHORT last year.

A punk band goes from gig to gig hoping to make enough money to pay for gas. They end up playing at a skinhead bar, which is a cover for much more violent business. When they witness a murder the film turns into a survive the night kind of situation. What sounds like Grindhouse genre fare is actually tackled with a serious approach. Case in point, Patrick Stewart plays the skinhead leader up against the likes of Anton Yelchin and Imogen Poots. This is a horror movie that could happen, making it all the more terrifying. Another impressive genre picture from the director of BLUE RUIN.

Digging into some anime this week (after my appetite was teased by the remake of GHOST IN THE SHELL), I stumbled across some well-regarded shows by online pundits. One that kept popping up was FOOD WARS. An aspiring culinary student puts his life on the line each episode… or so it feels… competing against his peers to stay in a highly regarded cooking school. Initially dismissed as something too weird, upon diving into the first episode I was hooked. The series is animated like it’s an action show, making for the most intense cooking challenges ever.

WHEN HARRY MET SALLY’s iconic “I’ll have what she’s having” is taken to a whole new level here. You will be craving each dish. Every flavour is embellished to incredible WTF levels. Preparing a recipe has never felt this exciting. Watching this cartoon feels triumphant at times… like actual ecstatic jubilation. Adding to the amazing excitement is a truly bizarre sense of humour. Slowly but surely, the character work creeps up until you’re rooting for every competition. This over-the-top cult classic was a real surprise.

A clever LIFE IS STRANGE-vibing time-travel anime series. This very addictive mystery spirals down a complicated path. The story follows a series of murder that happened years ago at our hero’s school. I won’t spoil anything, but he ends up getting a second chance to save a girl. His choices will have ramifications in the present day. While the ultimate resolution may dampen the overall excellence of the series, ERASED is totally worth watching. Non-anime fans will be drawn in by the intriguing concept and stay for the character. For fans of cliffhangers and complex mysteries, just as much as for fans of time travel and anime. 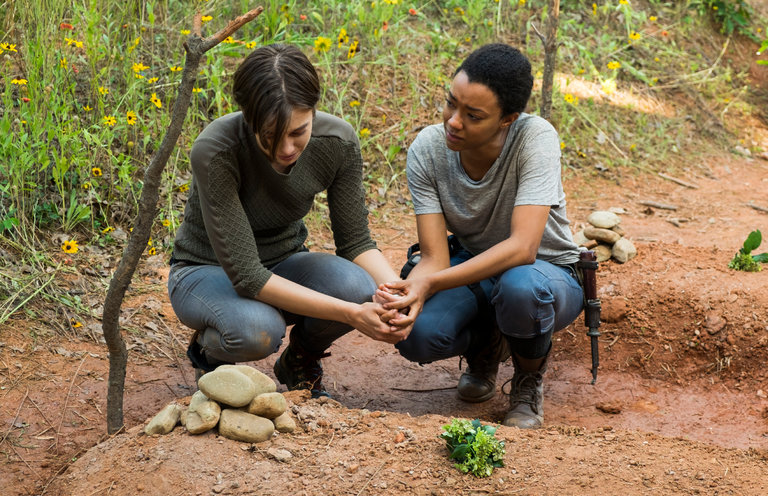 This week returned to the Hilltop, where we learned what Maggie is up to. Carl and Enid get a little closer, with their relationship blossoming despite the zombie apocalypse. It wasn’t all lovey dubby either… there were some rollerskates too… which reminded us these two are just kids after all. The Hilltop storyline explored a power struggle in the group, with Jesus making a strong candidate to lead these people. That is, until Maggie stands up to him and declares herself “Maggie Rhee” (which was emotional as much as it was celebratory). A slower episode focused on character, there was some interesting development to enjoy. Negan’s presence was once again felt by one of his henchman. How long before the Hilltop teams up with Alexandria and the Kingdom to take out Negan? While we all may want to see vengeance enacted, the looming shadow should darken the sky for another season at least. For now, the season is still setting the stage, showing us how four different communities survive in the new world.

The best show on TV! Caution: There be SPOILERS ahead! Each episode just goes further and further down the rabbit hole. Maeve is perhaps the most compelling character, blurring the lines between being a hero or a villain. The startling factor is how empathetic she is (as a murderer, brothel mistress, mother – oh yeah, and robot). Bernard and Dolores are other characters that we can also (surprisingly) easily connect to. Maeve got a step closer to freeing herself from ‘the maze’, while the Man in Black got a step closer to finding his ‘maze’. The most interesting new development is how Maeve is now the voice inside the hosts’ minds (like Anthony Hopkin’s Ford and the mysterious Arnold).

Dolores discovering the church was really exciting – urged by over-written memories and the gentle guidance of Arnold. Earlier, Hopkins stared at the church saying something about how this was his next ‘level’ (evolution) in Westworld. Perhaps religion (belief in the inner voice) will mark the end of AI slavery? Perhaps it will mark their doom? Are we about to see an Exodus, or a Holocaust? Will the smuggled out code manifest itself in a new (competing) theme park? Outlandish twist theories aside, there are so many more entirely enthralling questions asked each week. WESTWORLD can be enjoyed on the surface, even if it’s much more rewarding to participate and dig deep. Simply amazing television!

Get your cinephile on!
Check out NOIR 2.0 for more geeky goodness.