This image-driven series shines an obnoxious pastel neon light on the 80-iest 80s movies around. 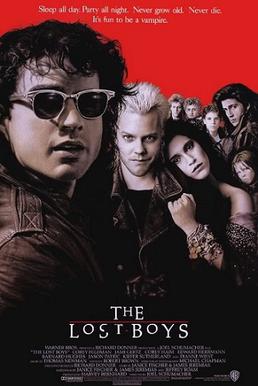 This edition of That’s So 80s sinks its fangs into THE LOST BOYS (1987), a young adult vampire flick where the monsters are actually scary and their skin doesn’t sparkle like diamonds.

Kiefer Sutherland leads a menacing gang of the undead dining on the buffet of Santa Clara, California. He’ll go up against Jason Patric and the 2 Coreys.

It doesn’t get much more 80s than Corey Haim and Corey Feldman, establishing their fad-tastic Tiger Beat relationship on solid ground.

Joel Schumacher stylishly directs this horror story with a sense of black humour stinging the edges. Don’t worry, it’s not as campy as BATMAN FOREVER.

This article is loaded with images, including quick retrospectives, and special 80s-themed ratings.

Not being a fan of horror movies has made me feel quite lost in many movie lover circles because I’m definitely in the minority.

I can’t really say where my dislike for the genre stemmed from, but for as long as I can recall, it’s been there.

As a 13 year old in the 80’s I was exposed to THE LOST BOYS and for some reason always enjoyed it despite the genre.

I think part of it has to do with the fact that the movie feels more like a parody or spoof than a real horror movie per se.

(Wait for Corey Haim to sing – in the YouTube clip above…. you’ll see.)

Many of the scenes are humorous and instead of scaring me, they make me laugh.  The characters don’t always take the subject matter so seriously also which helps the viewer feel the “lightness” of the story.

I love the use of the 2 Coreys here and they always were able to help enlighten an 80s film.  They were still young and innocent at the time. Their mired futures were too far ahead of them for anyone to even notice.

Jason Patric and Kiefer Sutherland also weren’t in their primes yet and thankfully neither of them were called on to hold this one together because they wouldn’t have been able to manage that at the time.

As far as Vampire movies go, this one is fun. We definitely can see how the use of characters who have supposed comic book knowledge on the subject could lead to some humorous and mixed-up scenes.

NERD ALERT:  It was also totally non-heinous to see a young Alex Winter (The Bill in BILL & TED’S EXCELLENT ADVENTURE) as one of the vampires – even though he wasn’t used enough.

THE LOST BOYS may sound familiar, and this kinda sorta is a spin-off of PETER PAN. Except instead of magic, in Santa Clara you are forever young because of – y’ know – vampires, dude.

This flick is totally 80s. The actors, style, and rockin’ soundtrack (like CRY LITTLE SISTER – above) represent the decade well.

This story follows two brothers who move into town and meet some new friends. The older brother (Jason Patric) gets into trouble with a gang of vampires, while the younger brother (Corey Haim) teams up with some comic book reading vampire slayers, the Frog Brothers (including Corey Feldman).

While aimed at the teenage demographic, this ain’t TWILIGHT, folks. These fanged immortals are scary. They actually have fangs too… used for biting (unlike the recent Young/Adult romance). Make no mistake, there are some laughs, and some romance, but this is a horror flick through and through. Joel Schumacher stylishly helms the proceeding, making sure we squirm in our seats.

While the girls swooned over Patric, Sutherland, or the 2 Coreys, the boys had popular 80s enjanue Jami Gertz. She would appear in a few other films of the decade (like SOLARBABIES with Patric – a MAD MAX-like future mixed with Rollerskates and an alien orb?!), and continued some success in the 90s with stuff like TWISTER.

Gertz, along with Keri Green from THE GOONIES, were one of my 80s screen crushes growing up, joining the ranks of singers like TIFFANY (remember her?! or do “I think I’m alone” here?) and the “Material Girl” herself, MADONNA.

THE LOST BOYS is a bonafide cult classic, especially for those fanboys who really dig on cheesy 80s elements. One of the biggest fads of the decade was the BRAT PACK (from John Hughes movies), but another craze was known as THE 2 COREYS. Haim and Feldman worked together in several films like LICENSE TO DRIVE, but LOST BOYS was their best.

Feldman had already made a name for himself with impressive performances in GREMLINS, THE GOONIES, and STAND BY ME, while Haim was known for stuff like Stephen King’s werewolf flick SILVER BULLET and the RUDY-like football tale LUCAS.

Sadly, their careers spiraled out. Instead of focusing on the negative, let’s focus on the immortal. The 2 Coreys contributed a lot to entertainment, from their movies, to their massive influence on pop culture and style. How many teeny bopper magazines did these guys sell?

And sorry sis for throwing darts at your Tiger Beat posters 😉

Kiefer Sutherland led the vampires of LOST BOYS. He really scared me, since I was younger than the 2 Coreys when I saw this. Sutherland dominates the screen. He’s a threatening menace, but he also has a charm about him. While Kiefer became an action hero, you wouldn’t have guessed it from his early work in STAND BY ME and this. It would be nice to see him return to the screen as a villain.

Overall, Schumacher’s vampire flick entertains because of how fun the overall experience is. Mixing comedy with horror was a new thing in the 80s mainstream. Several movies mixed these tones to great success. LOST BOYS was definitely one of them.

Horror fanboys and those curious about retro flicks should really enjoy themselves with this cult classic.

RETRO REWIND RATING (AKA WHAT 80S US THOUGHT)

FAST FORWARD RATING (AKA HOW DOES IT HOLD UP)

What 80s movie would you like to see Rob & Dan THAT’S-SO next?

The small things of history