Fanboys, it’s time to get sweaty with anticipation. CIVIL WAR is coming. The first trailer has debuted and it ranks right up there with the other massive nerdy blockbuster sneak previews we’ve seen this year: STAR WARS, BATMAN v SUPERMAN, and SUICIDE SQUAD. All of these trailers set the stage with story first, before we get the spastic MTV editing of insane action.

Comic fans will be surprised to see this CIVIL WAR focuses on Bucky, The Winter Soldier. The government wants to spy on the country’s heroes and know everything about them. Or at least that’s what fanboys assume. Marvel might be switching up what we’ve come to expect from the comic book storyline. Gone is the Mutant Registration Act, instead we have the Sokovia Accord.

The trailer makes it clear that Tony Stark and Steve Rogers are on opposite sides of this conflict. Cap stands up for what is right. Always. And so should we. He’s our hero in this complicated situation. Plus, this movie has his name in the title. 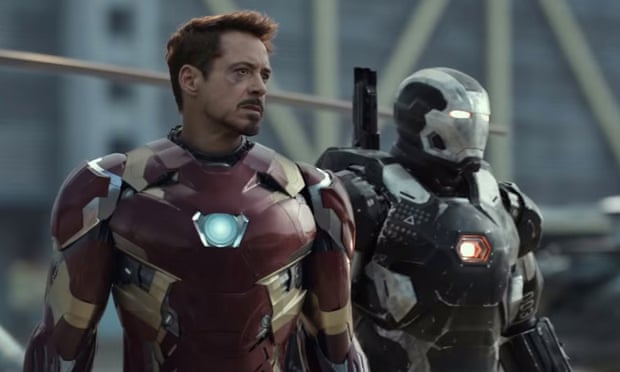 Stark abides by orders from William Hurt’s general, who says Bucky is a “vigilante.” Stark asks Rogers why he’s risking everything to protect Bucky. Cap replies, “He’s my friend.” Tony hits back, “So was I.” This seems to suggest Iron Man thinks it’s a matter of time before Cap becomes dangerous, like the government fears. Looks like Stark buys the hype… for now.

After the story is laid out, there is an impressive barrage of clips from action sequences fueled by a pounding 80s synth score that triumphantly turns operatic by the end. There are so many highlight moments in this first trailer. The majority of these are focused on Captain America’s team.

However, Falcon soars in, joining alongside Cap and Bucky. We don’t see Ant-man yet, but it’s assumed he’s on their team from that brief cameo from this past summer. There was an awesome fight moment in this sneak peek when Falcon spiral spins between two combatants and strikes them both.

There are a few small-scale fights on display. While some viewers may miss the grand spectacle of having a crumbling metropolis in the background, this more personal setting really works for CAPTAIN AMERICA. Do we need to see something like Golden Gate Bridge get destroyed on the big screen again?

The Russos keep the tone serious. Even when Stark jokes about wanting to punch Cap in his “pretty mouth” it doesn’t play as comedy. The movie is from Cap’s point-of-view, so if it’s not funny for him, we aren’t laughing either.

The best cramped space fight was when both of our “heroes” Bucky and Captain America attack Iron Man at the same time.  They punch and kick from either side, bashing and passing the vibranium shield around between one another. This moment lands with so much impact it may just be the best highlight from this entirely exciting trailer.

Speaking of vibranium, we get our first look at Black Panther. The comics tell us that his African nation of Wakanda (where he is prince) is where this precious rare metal comes from. There were several brief glimpses of Marvel’s newest hero in the trailer. The chase in an underground parking garage was the best of them. Once again, the Russos ground these superheroes in reality. While they could be in some sort of fantastic location to meet Panther, they are in a place we come across in our daily lives. This makes if feel like these heroes are part of our world.

We also briefly see which heroes from the Marvel Universe are fighting with who. It looks like Hawkeye and Scarlet Witch join Captain America’s team.  Meanwhile, Team Stark’s roster seems to include Black Widow, War Machine, and The Vision. Perhaps both sides are trying to recruit Black Panther?Think of it like Superman’s Kryptonite. If Stark could somehow experiment with vibranium, perhaps he would find a weakness?

The heaviest scene featured in this sneak preview is Stark holding an injured War Machine, who’s armour is badly damaged. Don’t get too emotional, folks, Marvel doesn’t reveal deaths in a trailer. Perhaps this action spurs Stark to side with the government’s agenda? Perhaps the government is responsible for War Machine’s injuries, pinning the blame on the Winter Soldier so they can pass their new laws? That would make for a pretty interesting and devious Marvel villain (an area they aren’t so strong at).

Captain America’s base could be Tony’s father’s old facility. We saw an old photo in ANT-MAN which showed a base stenciled “Stark”. This is where Ant-man met Falcon. Maybe the winged one will have to convince the small one to join their side? Maybe Rogers will remind Tony what his father’s ideals were and help change his mind about the new law?

NERD ALERT: Here’s how they could introduce SPIDER-MAN in the next trailer. We didn’t see him yet, and you know the Internet is going to be talking about the absence of their favourite Web-slinger. Next time, it’d be cool to see Cap’s team assembled on the street. Surveillance photos are being taken from far away. We assume it’s some baddies from the government preparing for war. Then then next photo is taken from an impossible angle. It’s revealed that Spidey is snapping shots for the Daily Bugle. The more he learns, the more he feels like he needs to pick a side.

Wow. What an impressive trailer. Thanks for stopping by. Make sure to leave your own theories in the comments below. Or share your favourite parts with the Interwebs.

There are so many gigantic movies on the horizon. It’s a good time to be a superhero fan. Forget the Marvel vs DC stuff because whoever loses that battle… we win.

“Leave a message at the beep.”