This episode of SUPERGIRL starts right where the last one left off. Ms. Cat Grant of CatCo Worldwide gets her interview with the Woman of Steel.  Even though Supergirl flew Cat’s car all the way to the top of a building, the cool and calm Cat isn’t phased at all.

During the interview they have some playful banter like, “Do you have a day job?” How ironic, coming from Kara’s boss. The biggest headline comes from Kara letting a big secret slip… Supergirl is actually Superman’s cousin.

Unfortunately, one of Supes’ old enemies hears the news and hunts down Kara to get some revenge.  This villain looks like a scorched up Iron Man. He wants Superman to feel some pain by losing a loved one.  The DEO (Department of the ExtraOrdinary) warns Supergirl that another villain from her home planet needs to be taken care of. She quips back to her DEO Boss, “What’s next, Keeping Up with the Kryptonians?” – then flies off to save the day.

from the SERIES PREMIERE

Supergirl arrives on the scene and saves a government worker, but is quickly shot by Not Iron Man . Actually, his name is Reactron, but I’m not sure that’s much better. At least the show is self-aware enough to make fun of it too, joking “Who named him that?” The answer is even better: “Jimmy Olsen.”

After our hero briefly scuffles with Reactron the credits roll, ringing the bell for the end of Round One.

Kara’s best friend at the office, Wynn, has created a secret lab for their merry band of misfits to meet up and fight crime. The faithful sidekick has even programmed a complex algorithm to detect the most appropriate crimes to swoop in and stop. As the episode continues we get several hints that Wynn is attracted to Kara. He keeps seeking her approval, but she keeps inadvertently shooting him down. That, and Jimmy Olsen kind of “cuts in.”

Kara, dressed up in her unassuming “human” costume

The funniest part of the episode occurs in their secret base. Olsen lets Clark’s name slip by accident. Wynn reacts with shock and disbelief, “Clark… Kent? Clark Kent?!” It’s safe to say Wynn has heard of the mild mannered reporter before. This goes to show how well these “Earthling” costumes work for Kara and Clark. No one expects that they’re really an alien superhero.

Alex also helps Kara prepare for Round Two with Reactron. The DEO storyline provides an Agents of SHIELD vibe and helps demonstrate how it takes a whole team to fight back against evil.  Supergirl is different than Superman because like Joe Cocker used to say she gets “by with a little help from (her) friends.”

This episode also emphasized how much Alex supports Kara. She tells her DEO boss that her sister is “every bit the hero He is. She just needs the chance to prove it.”

There was a great sequence with Alex and Kara, just hanging out like sisters eating some Chinese takeout. They listen to the appropriately remixed “Girls Just Wanna Have Fun” by Cindy Lauper. The song really captures the tone of the show. A real highlight here was when Kara throws a harmless pillow, making it at least a little harmful with those superpowers.

Sirens blare from the city streets and their Girls Night is cut short. Kara quips about waiting to watch HOMELAND together. Funny, because Melissa Benoist has appeared in that very show. It’s so great that this episode took some time to develop their relationship and remind us that they’ll always need each other.

Kara thinks she might be able to talk some sense into Reactron, offering another solution besides fighting. A great laugh comes when she’s asked what happens if he doesn’t want to talk. Our caped crusader replies, “Then I’ll punch him real hard until he falls down. That usually works.”

Comedy like this, mixed with the action and sci-fi elements, really reminds me of the tone of BUFFY. And that’s meant to be a big compliment. SUPERGIRL is fun like that cult classic 90s show.

Another co-starring character gets featured this episode: Maxwell Lord, CEO of National City’s Lord Technologies. His latest project is a super-fast train that can go 500 mph. For some reason, Reactron attacks Lord. It’s okay though, because Supergirl swoops in to save the day. (Even though Lord totally snubs her and gives credit to Superman. How does this benefit him?) Oh… and the theme music in this fight was awesome. The score definitely has the sweeping feature film feel to it, which really helps amplify the excitement. 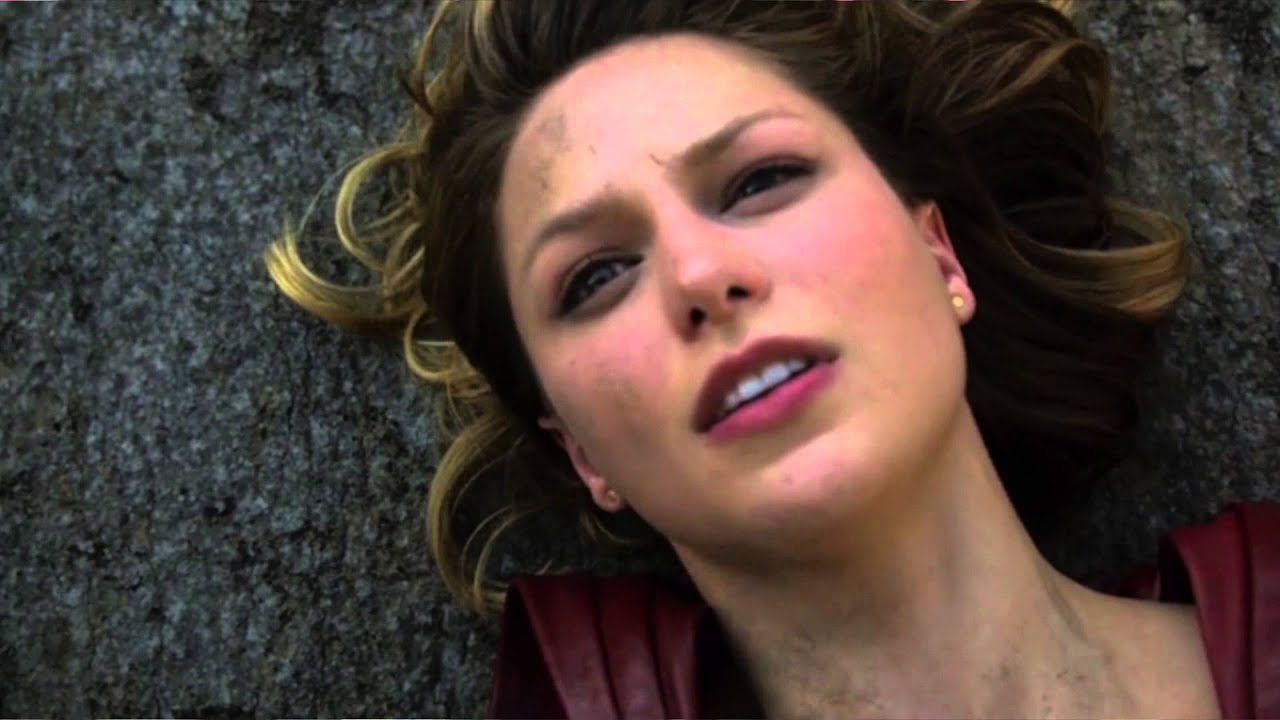 Since Not Iron Man’s suit is fully operational now, Round Two is even harder. Supergirl needs help… and the Man of Steel arrives just in time. We see a better glimpse at Superman this episode, but it’s still a brief flash. Turns out, Olsen has a secret communicator to call up Supes whenever things get too rough for Kara.

This unravels a storyline where Olsen needs to believe in Kara, and let her win the next battle on her own. Kara thinks since her cousin didn’t have any back-up, she shouldn’t either. By introducing doubt, Supergirl seems more vulnerable and human. Too bad Olsen wasn’t as supportive as Alex is. She believes “some day (Kara) will be saving (Superman).”

Round Three versus Reactron takes place at a ballroom gala for the Supergirl cover-story. Let’s dig into some set-up first. This show sets the stage really well. Kara is gorgeous, all dressed up in an exquisite green dress.

Which reminds me of an earlier joke from Cat, who asked how Kara can eat sticky buns all the time and keep -that- figure. Kara hilariously replies, “I’m an alien.” The ironic comment flies totally over Cat’s head. That isn’t to say she’s lost her step.

Cat proves how cool, calm, and in control she is when she dances with the charming and cunning Max Lord. A formidable opponent himself, Cat doesn’t lose the subtle psychological warfare playing under their words.

The romantic triangle continues to get more complicated. Wynn asks Kara for a dance. She accepts. This is what he’s been waiting for. However, before the song is over Jimmy Olsen cuts in the dance, “Do you mind?” Wynn most definitely “minds” but easily submits.

Olsen and Kara have a good chemistry together. Melissa Benoist delivers such a charming performance as the awkward and shy Kara, as she giggles in the arms of her affection. Benoist is my new screen crush. She portrays Supergirl / Kara like Buffy mixed with two scoops of Willow.

By the end of the episode, the triangle takes a twist. Olsen’s ex-girlfriend, Lucy Lane (Jenna Dewan), shows up. That famous last name should ring a bell. Kara uses her powers for no good and eavesdrops on their private conversation. Kara was just starting to fall for him, and now Olsen has dinner planned with his ex.

Let’s hope the show doesn’t get too soap opera, but this storyline does add for some interesting shifting character dynamics.

Ding! Round Three. Fight! Reactron crashes the party. Supergirl shows up, more prepared than ever. Now she knows what powers Not Iron Man. All she needs to do is rip out his nuclear power source from his chest and contain it in lead. No problem, right. Kara uses her super x-ray vision, finds a suitable statue, melts it with laser vision, dips her hand in iron (that’s somehow still pliable), and totally Iron Fists him in the chest, finally putting an end to his terror.

The episode has a great capper at the end. Superman texts Kara (yeah, he’s so 2015) with a supportive message. We know we’re never going to see The Man Of Steel. This was probably one of the better ways the show-runners have handled it so far. It actually works. Superman’s message is just what Kara needed. “You stopped Reactron. Something I could never do… Guess it was a job for Supergirl.”

SUPERGIRL continues its momentum, proving its one of the few new fall TV shows worth watching. Play some catch up and join in the fun. Stay tuned for more reviews coming soon.