CHANNEL SLIPPING deconstructs the TV you don’t want to SLIP/THROUGH the cracks with Highlights, Interpretations, and Nerdy Theories.

This episode, titled “THANK YOU”, will be one of the most talked about all season – maybe all series. Most of you know why. After setting the stage, this article will get into (clearly marked) spoiler territory.

The way this season is structured the focus of each episode switches from the Home Team and the Away Team. This intense mind-blowing episode starts with the blaring horn from earlier. The zombies divert their attention from Daryl’s loud chopper and head to Alexandria.

Daryl isn’t sure what the right choice is here. He worries about Carol and the rest back home. He veers off the path, disobeying the mission and Abraham’s plea to stick to it. Daryl rockets towards Alexandria before bad gets worse.

Rick decides to go solo, racing back to the RV. Before he leaves he tells Michonne and Glenn to leave people behind if they get injured or something. Our hero basically warns them not to risk their lives when they don’t have to. Heath hears the exchange, and doesn’t like it.

One of the Alexandrians in Michonne’s squad gets bitten. This is what Rick was warning them about. They hold up in a Pet Store / Pet Sematary (where creepy bones fill the cages) and tend to their wounds, waiting for the herd to pass by since they can’t outrun them with injured teammates. To ensure the zombies don’t overwhelm them Glenn comes up with a plan. He teams up with Nicholas to create a diversion by burning down a nearby feed store.

Michonne has a nice moment with the married (and bitten) Alexandrian who wants to get a message to his wife. He tells her of how he met his future wife because Aaron found him on the outside and brought him in. He says, “Finding her in all of this was everything.” (More on this later.) He writes a message on a receipt roll from the store. Michonne refuses it saying, “You’re getting home.” When they debate what to do next, Heath demonstrates some strong leadership skills this episode, mentioning how his people are “not like them.” No one will get left behind.

Convinced, Michonne and Heath come up with their own plan. They bust out of the store, guns blazing, going WILD BUNCH on some zeeks. Unfortunately, “new girl” dies DAWN OF THE DEAD style in the process. Fortunately, she’s a hero until the end, urging her friends (like Heath) to “Go!” She doesn’t want someone to die saving her when it’s already too late. That was a brave goodbye.

On the way to the feed store, Nicholas is disturbed to find people he left behind on a previous mission. He’s haunted by the guilt and shame. He feels like he still needs to make amends. That’s why he’s on this mission with Glenn.

Too bad the feed store is already burned down. They have to think on their feet and find a new escape route because more and more zombies are hoarding their surroundings.

I won’t ruin the outcomes of all of these separate missions. I will comment on an incredible moment before we get into spoiler territory. Michonne defended Rick’s plan to leave people behind. She says Heath doesn’t know what it’s like – or why Rick even thought something like that. 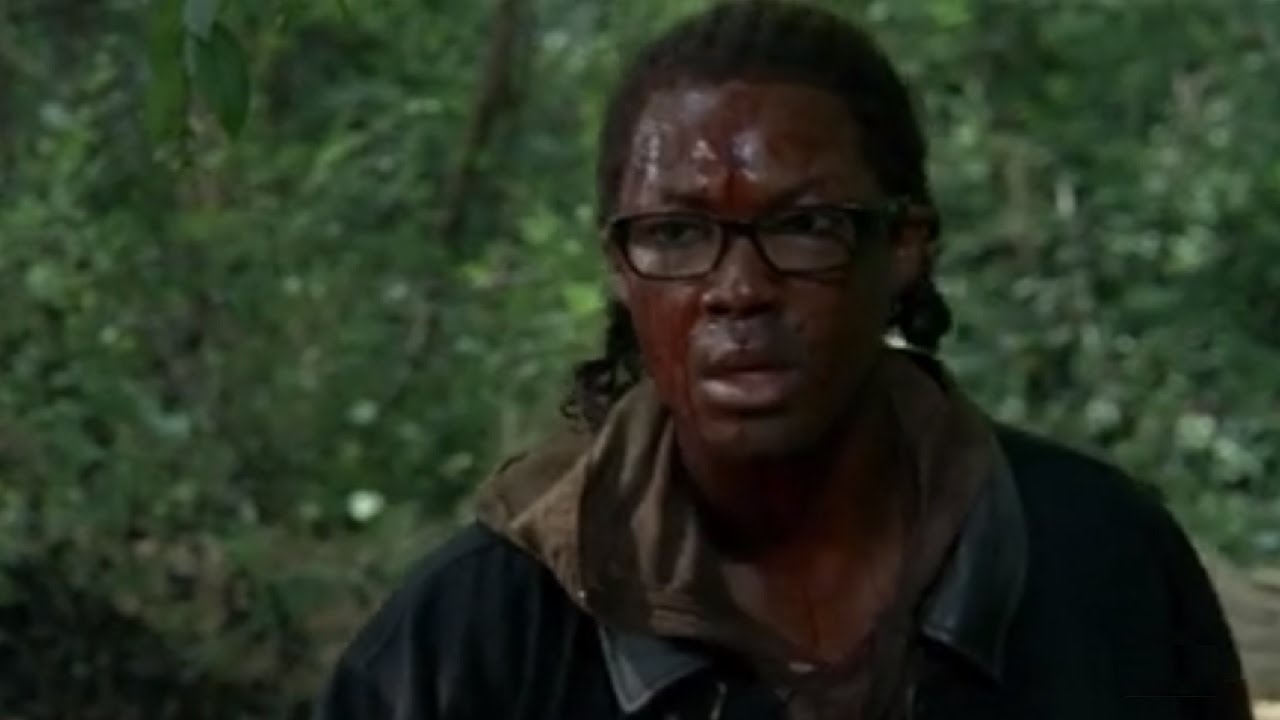 Michonne tells Heath he won’t know until he’s covered in blood and can’t tell if the blood is from walkers, himself, or his friends. Later, Heath finds out exactly what the wise samurai meant when he stares at his own bloodied reflection in a stream, after their battle to escape the horde.

Meanwhile, Rick has made it back to the RV. He tries to get Glenn on the Walkee Talkee. There’s just static. While he catches his breath, a couple of Wolves attack. Rick takes them on no problem and finds babyfood in their pockets. They’re fighting to survive and provide for their children too. Perhaps Rick feels conflicted for a moment, but he knows what is necessary. Good thing. More Wolves are coming.

Rick shoots them down, drawing forest roamers towards the RV. A massive wave of walkers heads right for him, making for an exciting cliffhanger to end the episode. 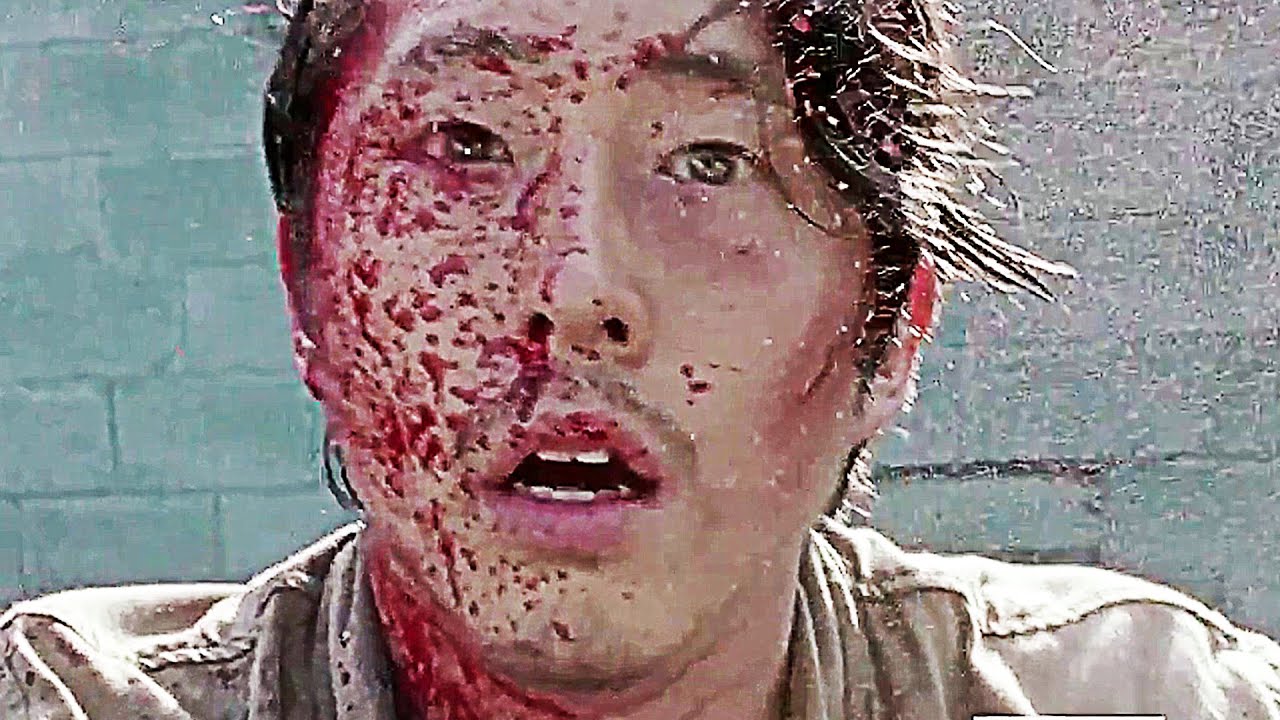 You’ve been in denial for a while now. But it’s true. It has to be true. Doesn’t it? You have to wonder if Glenn partnered with Michonne or something would this story have ended differently? This episode made it more clear that Nicholas was experiencing extreme guilt and nearly driven insane. His vision distorts a couple of times as panic sets in. Nicholas ends his life with a sincere “Thank You” to Glenn. He felt redeemed and forgiven because Glenn gave him a second (third, forth) chance. That is the only poetic beauty of this moment.

Watching this monumental sequence was totally captivating. The first thing we think is Glenn fell under Nicholas. The zombies aren’t eating our favourite pizza delivery boy, they’re eating Nicholas. However, stuff like shirt colour or common sense confirms our worst fears. Even if buddy was on top, those zombies will eat through him. Plus, this area is surrounded. It’s really unlikely Glenn somehow rolled under the dumpster, got covered in guts, avoided zombie detection, and got to the fire escape – as bad as we all want this to be true. If Glenn isn’t dead, THE WALKING DEAD just jumped the shark.

Earlier, Glenn said he was going on this dangerous mission because of Maggie back home. Michonne warned him not to risk it. He was adamant that this is exactly why he has to risk it.

Way back when he took the Polaroid camera on a supply run, I suspected it was because he has a child on the way. He wanted to take his baby’s picture. Maybe this way, his child will have a picture of him – if Maggie is pregnant?

The earlier scene with the bitten married man and Michonne parallels beautifully with Maggie and Glenn’s story. They met after the zombie apocalypse, where they never would have before. This emotional storytelling technique subtly foreshadows what happens by the end. The earlier scene is a perfect way to have a goodbye without being explicit about it.

The way the episode was edited it seemed like Rick or Daryl were going to come and save the day. We didn’t know if they’d help Michonne’s crew or Glenn. We just expected one of those last minute rescues that happen in so many movies and television shows. Not only did that not happen, the show also breaks convention by doing something so major like this 3 episodes into a season. The show-runners know how savvy and cynical we are. They know we expect big things to go down on a season finale. They enjoy pulling the rug out from under us… and we enjoy it too.

And then… The show breaks another convention. This isn’t even the end of the episode. Rick’s RV encounter with The Wolves happened next. Since the show just killed off a major character, we feel extra anxiety watching Rick. Could he be next?

This is THE WALKING DEAD. These writers make tough decisions that punch you right in the stomach. We’ll be catching our breath for a few weeks after this heavy blow.