The city is on fire. The power is out. And an arena full of zombies is about to bust open. FEAR THE WALKING DEAD ended its season with a bang. In true WALKING DEAD fashion, not everyone survived the episode.

Robert Kirkman (the comic book creator) wrote the exciting finale. This storyline has never appeared in the comics so its new to everyone – including Kirkman.

The episode starts with lots of intensity, as our heroes escape their neighbourhood headed for the military base in hopes to rescue Griselda and Nick. The barber, Daniel, brings the kidnapped and tortured soldier along with them to help locate their taken loved ones.

In a brief touching moment, Madison says goodbye to her house by looking at the height lines of her children etched onto the wall. This scene gives a sense that she knows she won’t return. She knows this is a completely new world.

Madison feels more like our hero – the Rick Grimes of this series. She wants to get her son back, and you get the impression she’ll do whatever’s necessary to ensure that will happen.

Nick is in good hands though. He’s set to break free with his well-dressed saviour, Strand (who I was calling Oz last week). This mysterious figure is quite compelling. We’ve already see him pay off the guards for information and to keep Nick in his cell. What is his job? And who is this Annabelle he has to find?

This episode was filled with horror. Nick and Strand try and escape the base. They come upon the soldier Strand bargained with, but he’s already dead. That was their way out. Now, they’re screwed.

The most intense moment came as they ran from Walkers only to get stuck in a dead-end with the Undead.

Luckily, Liza (Travis’ ex-wife) has been given a pass-key to unlock doors. The doctor told her to get on the last helicopters out, but she couldn’t leave Nick behind.

Also, the doctor agreed to Liza bringing two others with her – that’s it. She chose her son, Chris, and Travis. However, as we can see she defied the doc’s orders and went for Nick anyway. Liza finds Nick and Strand in the nick of time.

In the process, Liza’s path also collides with Madison, Travis, and Daniel. Before the episode ends, she reveals the truth. Griselda was compassionately taken care of, then “taken care of”.

The family had a tougher time finding Nick than Liza. The barber put that Arena full of zombies to good use. He played the Pied Piper and led them to the military. While the soldiers were attacking back or being devoured, our heroes made their way inside the base.

Strand is the man with the plan. He wants to get to the coast, saying he is fully prepared for this sort of scenario. All they have to do is get back to their car and drive away.

What does he have planned? Can he be trusted? Why did he say he needed Nick’s set of skills for the apocalypse? Since this is THE WALKING DEAD we know getting to his home base won’t be that easy.

Alicia and Chris were left behind to guard the car. Unfortunately, they were no match for soldiers who demanded it for themselves. When Travis and Madison arrive with their crew, there’s no sign of them.

Once they reveal themselves, it isn’t long before the tortured soldier Travis freed returns. He wants pay back for what Daniel did to him, and shoots Ophelia. 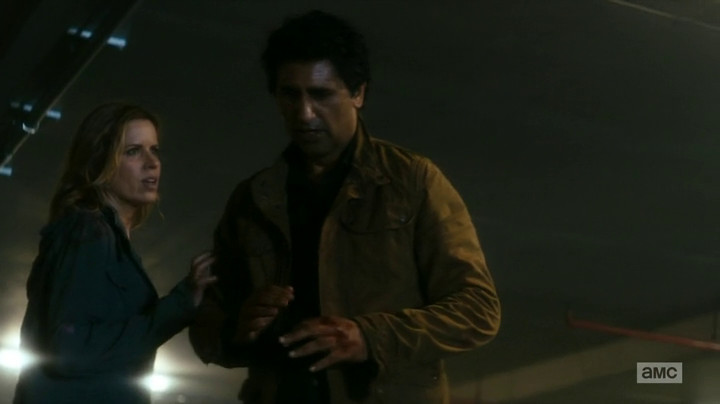 Travis snaps and pummels the soldier with his bare hands. This is our first glimpse at what this responsible family man is capable of. He feels like this was his fault. He believed in the best of man. He thought the soldier would leave, baring no grudge. He was wrong, and now someone is hurt and possibly dead because of it. Travis won’t accept that.

This was an interesting and welcomed turn of events for this seemingly pacifist.

The creepiest image this episode was as our heroes escaped the carnage. The see ashy piles of rubble, which appear to be from burnt corpses. Amongst the charred bodies is a child’s doll. What a haunting image that speaks volumes.

This hints at the levels the military went to. Not only disposing of infected people (probably from the cells), but also showing no mercy on children.

earlier in the season

Another impactful image was after our heroes have escaped. They drive to Strand’s home, via the LA river (the concrete kind from T2). Nick has his hand out of the car window, like a child, maneuvering it in the breeze. Free.

Later on, Nick will talk of how the rest of the world is catching up to him now. He’s been living in his own version of the apocalypse since his father died.

All is Lost – Nick in the premiere

Once they arrive on the coast at Strand’s home, he grabs supplies and readies himself to leave. It turns out Annabelle is on a cruise ship (or the name of the vessel) at sea. The plan now is to get on that boat and escape the Land of the Dead.

Nick is confused. This is an excellent choice of a place to bunker down in. He asks if they can stay behind in Strand’s house, but is denied. Strand gives Nick a shudder-inducing final piece of advice, “Embrace the madness.”

These cautionary words will surely echo into Season 2.

Before that happens though, FEAR THE WALKING DEAD kicks us in the gut. You can’t have a happy ending with this kind of show, right. Travis has a difficult decision to make. One of our heroes was bitten during the escape.

He takes the gun and the decision into his own hands. Despite his hatred of guns, and his reluctance to shoot a name-tagged employee earlier, Travis makes the right choice – the hard choice – and shows mercy by pulling the trigger this time.

Travis is sure to develop further next season, along with the rest of the cast. His final action will have dramatic repercussions with surviving characters.

Hopefully, Strand sticks around as he is a very intriguing character.

That said… Our hero is Madison, this is her show, so it will be exciting to see how her story continues through a longer season next year.

Of course, there are a few other character storylines that will continue to evolve. Daniel is a complex and haunted man. While Alicia and Chris are still rebelling against chaos and reacting to the apocalypse. They have to “catch up” to Nick.

WALKING DEAD’s focus on character is the main reason these shows are so entertaining. By spending time setting up this world, the horror lands with much more impact.

Stay tuned for reviews of the new WALKING DEAD season.