The third episode of FEAR THE WALKING DEAD kicks it off in “F#%@ the Police” style, as rioters flip a squad car. The police try and control the massive surging riot. Loud sirens blare, drowning out the megaphone commands from the authorities. Luckily, Travis and his family are safe inside a barbershop. Unluckily, the neighbourhood is on fire, and so is the shop next door. Travis, his son, and ex-wife, team up with the barber, his wife, and daughter. They take to the streets, which are filled with anarchy and hysteria.

While most of the unruly crowd are protesters, rioters, and police, there are also zombies sprinkled about, gnashing and tearing up their prey.

Madison waits for Travis to return home. She has to take care of Nick as he suffers through withdrawal. The most interesting element in this side of the story is how Alicia doesn’t know about zombies… yet. Madison tries to keep her son and daughter occupied by playing Monopoly. This was a great subtle way to get out some exposition but not feel so obvious about. it.

Hints are dropped about the past and her children’s father. Something happened to him. They waited for him to return, just like they’re waiting for Travis. It will be interesting to see how this impacts their ability to deal with loss, and how they will form new relationships in the upcoming zombie apocalypse.

It was nice to see this family act like a family. We know dynamics are about to shift, but it’s great to have this sense of normalcy before it’s Apocalypse Now. Alicia even cracks a funny joke about Monopoly being “kindergarten capitalism.”

This transitions poetically with a shift in scenery back to the riots – society crumbling… the end of capitalism.

Travis guides his family to safety, along with the barbershop trio. During the commotion, the barber’s wife injures her ankle badly. Being WALKING DEAD fans we know what this means right. Her wound will get infected, she’ll die, and return as a flesh-eating zombie. For now, they stay together as a team and drive back to Travis’ home.

Along the way they pass a hospital. This was pretty creepy. Random stragglers (a.k.a. former patients) stumble towards police in the parking lot. The authorities shoot them down.

Another freaky moment during the drive home was when the lights of the cityscape went out one block at a time. Society: Unplugged. This image spoke volumes, like a Soothsayer in a Shakespearean tragedy.

This episode was the scariest so far. The tension really starts to mount when we rejoin Madison back home with her children. A dog comes scratching at their door. This can’t be good. You knew it too. These kind of moments are horror cliches that really help build the anticipation.

Of course, the dog starts barking, and their neighbour turned zombie comes a knockin’. Nick knows their next door neighbour has a shotgun. He knows they need to defend themselves, so they go on a mission and retrieve it.

Alicia hasn’t seen a zombie yet, and has no idea what’s really going on. This dramatic irony works really well when she’s the one who goes back for bullets. Alone. Cliched? Sure… but super effective, inviting the audience to yell at the screen.

Watching Alicia discover what the Walking Dead are was really compelling, intense, and exciting television. The resulting chase through a garden maze was totally edge-of-your-seat captivating.

Eventually, Travis returns home, reunites with Madison, dispatches a zombie, and introduces his new “friends.” The relationship between these 3 groups is already really interesting.

The barber is matter of fact, street-smart, and perhaps a survivor of violence already. His practical point of view should come in handy during doomsday preparation. However, he could be wrong about his statement that “good people are the first to die.” His daughter wants to stay with Travis and his family (er, families). She could be right.

At this point, the barber’s injured wife is a liability. The irony here is he doesn’t know the right (ie: practical) thing to do is leave her before she becomes one of the undead.

We also learn a big difference between Madison and Travis this episode. While Travis is the old-fashioned boy-scout hero, holding onto hope against the darkness, Madison is the practical one. She’s realistic, but also empathetic. She wants to put her Walker neighbour out of her misery. Factoring into her decision is what the zombie’s husband will come home to.

Later on, we’ll see that Madison was right. Travis may be more like this series’ Dale, holding onto hope well into the zombie outbreak. 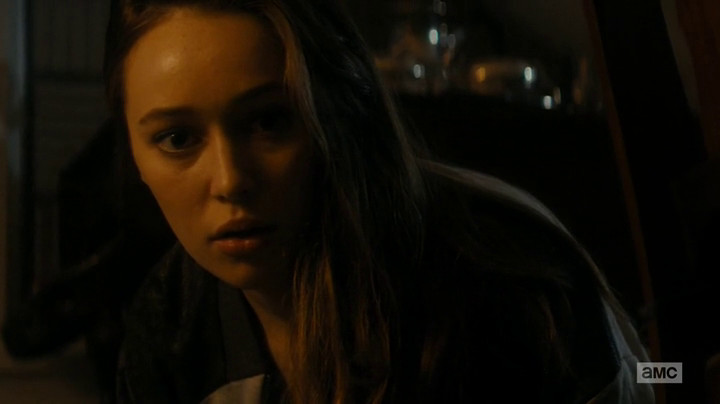 Now that Alicia knows about the Walking Dead, she realizes what happened to her boyfriend earlier. It was heart-breaking to watch this idea spin around her head.

The whole group knows how dangerous things are getting. Despite this, Travis urges them to stay the night and leave the morning.

Fast forward a bit, Travis drives one car with his ex-wife and son, while Madison drives another with her children. 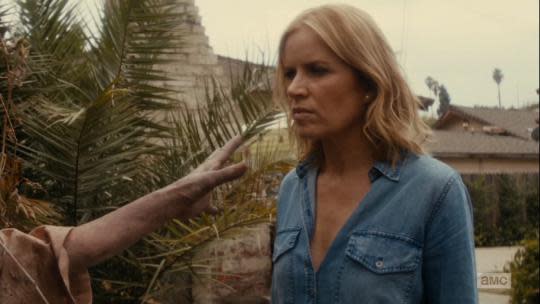 In dramatic fashion, their neighbour finally arrives home. He has no idea his wife has turned. This was Madison’s worst fear, and it’s coming true. She splits away from her husband to save the day.

FEAR THE WALKING DEAD is her show. She is our hero. As she warns the husband not to approach his zombie wife a gunshot rings out. Was it the barber? Nope. The miltary?!

It looks like this show is heading into a bold new direction. Will the miltary have their best interests at heart? Are the powers that be hoarding resources for themselves, sending out these soldiers to monitor the masses before they all riot? Or is this extreme reaction actually to serve and protect the citizenship?

The creepiest image here was when the soldiers marked the houses with spraypaint, assumingly making note of survivors or bodies. The haunting visual reminds me of the aftermath of Hurricane Katrina.

This zombie disaster continues to build each episode, firmly establishing character as the driving force once again. The best part of WALKING DEAD is the character work. We care about these people. We are interested in how different personalities will deal with an extreme survival situation such as the end of civilization.

Zombies are definitely cool, but just watching these undead monsters get killed each week wouldn’t be enough. It would grow tiring rather quickly. What makes these shows so great is the set-up and staging of the world, carefully establishing characters, and exploring rich universal themes.

What do they have in store for us next? How long can the military protect this neighbourhood? Will they let people leave? Tune in next week for some more nerdy analysis.