Three artists from the City of Compton changed the world with their music. Ice Cube, Dr. Dre, and Eazy-E formed N.W.A. in the late 80s, influencing a whole genre of music for decades to come.

We finally have a historical biopic for this legendary hip hop group known for creating the revolutionary sub-genre of “reality rap”, which the media spun into “gangster rap”.

STRAIGHT OUTTA COMPTON has tons of great surprises for fans of the group and hip hop in general. For that reason, this is a spoiler free review. Most know the story, but most won’t expect all the exciting music references

Compton was only known as the number one murder capital in the world at the time, before NWA burst onto the scene. During this time, ramming tanks would break down random houses to crackdown on drugs.

Imagine being a stand-up citizen living here, like Cube or Dre? You could never relax. Ever. At any moment, your wall could explode. The stage is set with a sequence such as this, where we meet Eazy-E… selling drugs.

Eazy-E was the true gangster of the group. He realized the dangers of this life and wanted out. Hey, these guys aren’t perfect, but at least Eazy realized this lifestyle wasn’t worth it, where so many other youngsters never get a chance to change their mind… it’s too late.

Meet Dr. Dre, a popular DJ who wants to make beats for rappers. Enter Cube, the master lyricist joker who’s just trying to make from school to home alive. Dre approaches E to fund the studio time, and we’re on our way.

For those familiar with this incredible true story there are tons of Easter Eggs sprinkled about.

The performances are a real highlight. While the story is the main draw, these young actors really hold the screen. Each one has their own moment to shine. Each artist has a rich and layered real life story. There’s too much to fit into one movie.

History gets streamlined to fit a reasonable runtime, but everything that makes it on screen is totally captivating. Hip hop fans are in for a real treat, as they watch the backstory for their Beatles. As a long time fan of what these guys became, COMPTON felt like a poem to the craft of expression. 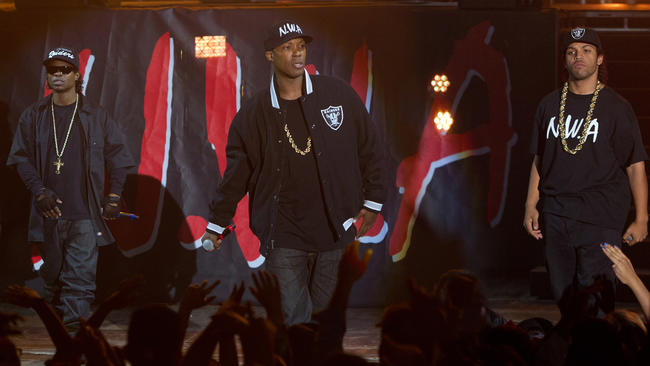 The concert sequences are electrifying. The crew has an amazing kinetic chemistry on stage. It felt like really being at a NWA concert.

These actors completely lost themselves in their roles. This full immersion of character works off stage even better, as the friendships of the main trio are even more potent. 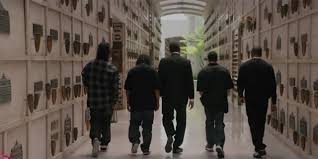 A scene mourning the loss of a loved one delves under the mask of machismo. These men care about each other. It’s heartbreaking.

Another scene at a hospital is earth shaking. These actors really put in the work. Their unknown status helps the illusion. They are the characters, even though we know these characters are real people, familiar ones revered for decades.

Cube’s son has the largest hurdle to clear, overcoming the gimmick and family factors. For these reasons and more, each actor is impressive.

The stylized direction by F. Gary Gray (FRIDAY, ITALIAN JOB, SET IT OFF) brings a visual theatrical flair to the proceedings. A thematic highlight was the red and blue bandannas tied together, united over a common foe: the police.

Unfortunately, not much has changed decades later. One scene helps hit the police state home is when Cube leaves him home and is immediately forced to the curb for no reason. The best sequence demonstrating the racist mistreatment by police occurs outside a recording studio.

Fans of the trailer who are expecting action will be disappointed. This is a dramatic character piece. While there are some strong themes and (sadly still appropriate) social commentary, COMPTON is focused on what these unlikely men accomplished under tremendous odds.

It’s amazing when you think of the hurdles they had to clear to be heard. They had to survive their neighbourhood, find each other, make good music, and get recognized by a white producer (a nuanced slimy / noble, Paul Giamatti) just to start their journey as NWA.

The first two acts are so brilliantly set-up, as we join the trio on their rise. By the third act, the fall begins. We’ve come to love these men so much we don’t want to see them split up. The shift in tone balances this story, but almost takes the air out of the momentum. This is life.

The third act, while heavy, also had some great moments. There were some real highlights post break-up, with special Avengers-like rap superhero cameos. While the fall is never as fun as the rise, by the end there is a silver lining and a love letter to their fallen brother.

You get old enough and you see your history on film. The familiar legend of NWA greatly deserved its own movie, for a long time. 25 years later, this group is just as important as it once was. Their message is still just as powerful.

Listen to the lyrics of “F@#k the Police” and you’ll see. Those that wanted it banned, didn’t find it offensive because of swearing or supposedly inciting violence. They wanted it banned because of what it said between the chorus, like how society treated them.

STRAIGHT OUTTA COMPTON is an important biopic. For fans, it’s the story we’ve been waiting for, brilliantly executed from the stylized direction to the enveloped performances. For the general audience, this inspiring drama about struggling artists is still worth watching.

Those curious will see the bigger picture of how NWA fits into a larger context, influencing the decades of music that followed their break-up.

Enjoy the hit single the movie takes its title from.

Want to know more about NWA or the time period in rap?

Check out my earlier Trailer Breakdown, which briefly deconstructs history.