STAR WARS: THE FORCE AWAKENS debuted some amazing Behind the Scenes footage at this weekend’s San Diego Comic Con. It had me near tears. The video focuses on nostalgia and practical effects work.

The footage includes Mark Hamill talking about THE FORCE AWAKENS, brief actor interviews, and a tour of the set during filming. We also get our first glimpse at Princess (Queen?) Leia, Domnhall Gleeson, Peter Mayhew back as Chewbacca, Simon Pegg (as an alien?), and several new creatures.

The highlight was seeing the pre-production work on the crashed TIE Fighter, then seeing it during filming, and after post-production. We don’t get the sequence ruined or anything. In fact, this sneak preview doesn’t spoil any story elements either.

This brand new mind-blowing footage aired during a panel. Most of the cast and crew were in attendance. The best part was when an alien creature took to the stage. JJ Abrams explains why real world effects are so important for creating a believable world.

Watch these must-see videos and let me know what you think. If you thought it wasn’t possible to anticipate STAR WARS any more than you already do, think again. 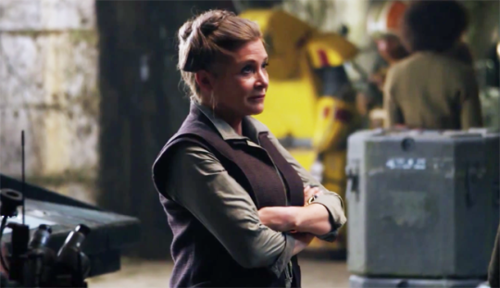