Marvel’s DAREDEVIL is one of the best new shows out there. Whether you’re a die-hard comic book nerd or not, chances are you enjoyed Season One on NetFlix.

Recently, news hit the Interwebs that THE PUNISHER was coming to the screen. Jon Bernthal from THE WALKING DEAD and FURY was cast as the vigilante hero.

If He Who Dons the Skull is an initial antagonist for DAREDEVIL’s second season, does this mean Elektra will be an ally?

Jennifer Garner played this character in the hated and down right loathed DAREDEVIL movie with Ben Affleck. Let’s hope this storyline works better in this television series.

“a mysterious woman from Matt Murdock’s past whose dangerous and exotic ways may be more than he can handle.”

Yung joins the filming, which just began this week.

Yung in GI JOE… not much of a stretch, eh

The series has already highlighted some amazing martial arts choreography, with the craziest fights this side of THE RAID. How much action will Yung’s role require?

Stay tuned for more news about DAREDEVIL. Rumours are swirling about that BULLSEYE will be joining the cast of characters.

Who would you like to see portray this infamous assassin?

(Check out my nerdy review of the DAREDEVIL pilot episode)

Elodie Yung… that red suits her

Would you like to see more short form news bits regarding the upcoming entertainment you don’t want to slip through the cracks? 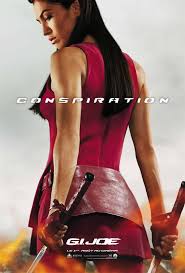