Last episode ended with a shocking cliffhanger. It totally worked on me… as intended. I really like how TRUE DETECTIVE plays with its audience. The writers expect the viewer to participate in solving this compelling mystery. Every now and then, they toy with our expectations too. I really dig this approach.

My nerdy deconstruction here will get into spoilers for last week’s episode. I will limit spoilers for this episode to recapping plot (for contextual analysis purposes only).

Let’s get right to it… The episode begins with strange imagery. Elvis sings on stage, bathed in blue surroundings. It’s the bar. Colin Farrell’s character sits at his table. Alive. What? He just took two shotgun blasts to the chest in last episode’s cliffhanger.

And it gets stranger. A voice says to him, “You’ve got your father’s hands.” Farrell looks down to his scraped and bloodied knuckles. What was his father like? Could he be worse than Farrell?

Then the reveal, Farrell sits across from an older uniformed officer (Fred Ward; from nerdy cult classic, TREMORS). The puzzled Farrell asks, “Where is this?” The older man wonders, “I don’ know.” Farrell looks down to his chest – and a gaping shotgun wound. Pulpy and bloody. What?

Then the big reveal, Farrell gasps awake on Casper’s apartment floor. He checks his wounds. They’re not that bad. What? Turns out he was shot with riot shells, “like police use.” Hint, hint, wink, wink(?)

Rachel McAdams finds out about Farrell’s dangerous solo excursion and isn’t pleased. Farrell isn’t phased, he looks at it like this: he found the murder scene and got a solid tip — there’s a prostitute out there who knows something.

They also collect phone records and learn that a hard-drive was stolen. It contained camera footage from Casper’s. The gears begin to tumble into place, as our heroes go about trying to solve the case.

Vince Vaughn has an unusual introduction this episode. He’s in a fertility clinic with his girlfriend (Kelly Reilly). Looks like they need a sperm sample for something. Reilly tries to encourage Vaughn with some oral pleasure. It isn’t working.

I wonder what test they’re conducting with this sample? Is this fertility clinic appointment to help them have children? Is one of them infertile? Vaughn insists, “I’m fine.” But Reilly is upset. She storms out, insulting him as she goes, “Suck your own dick.”

I’m unsure what this scene really means for now, but I find this sexual dysfunction parallels with Taylor Kitsch’s Highway Patrol character.

McAdams teams up with Kitsch to interview prostitutes. They’re looking for someone who worked with Casper. McAdams tells Kitsch to “put those looks to use.” Is this some suggestive flirting?

This episode eventually leads them to question the young step-mother of a suspect. She shares a house with some usual suspects that may show up later.

Really, this sequence sets up conflict between McAdams and the Sheriff Department. See, the husband has some influence in the department.

From another moment in the episode, the higher ups seemed to playing McAdams against Farrell, and vise versa. Farrell is painted as a dirty cop. They need evidence he took money. (Vaughn might help with that later.) The interrogate McAdams, thinking he may have even staged the Casper crime scene. Meanwhile, McAdams is portrayed to Farrell as an above-the-law rule breaker.

So, it looks like Farrell’s earlier suspicions are correct. They might have been assigned the Casper case because they are seen as incompetent. The law wants this case buried for some reason.

TRUE DETECTIVE slowly and deliberately builds up this mystery, delaying any immediate satisfaction. This thriller simmers to a boil.

from episode one… trying to ditch the “boyfriend”

McAdams’ storyline sees her confronted by her over sensitive boyfriend. I love the role reversal here. Usually, in cop shows, it’s the man being a womanizer with a needy girlfriend. Here, McAdams ditches him. I’m thinking she doesn’t want to form any connections. Once she gets close to someone, she breaks it off.

Just to be sure this guy doesn’t come back McAdams delivers a clear threat, “Talk like that again, and you’re gonna need a little baggy to put your teeth in.” I like how this concept is paralleled later with Vaughn’s actions later. (Read on…)

Last episode, Kitsch stared at a male prostitute from his balcony. Is this why he called up his friend? Is he testing himself? Since he beats up his buddy after being touched, I’m thinking he really hates that side of himself. It seems like, if Kitsch is gay, he hates himself for it.

This just adds another layer of complexity. I’m expecting even more layers in future episodes.

Meanwhile… Vaughn gets scarier, making me even more suspicious. I’m still thinking he’s behind Casper’s murder. Regardless, this episode showed us how intimidating his character can be. Vaughn can coerce with violence and with words.

His first shakedown is with a construction company. He subtly reminds the man of his own family. After Vaughn makes this subtle threat, he demands 25% of business. And he gets it.

Later, Vaughn shakes the owner of his former club. He comes with back-up this time, as the new owners are gangster thugs. The gold-toothed leader stands up to Vaughn. He isn’t intimidated. Vaughn convinces him otherwise, going all JOHN WICK on the guy. This was great. Seriously. Give Vaughn the next Liam Neeson action flick instead.

By the end of the sequence, Vaughn takes some pliers to the thug’s golden grill. When he gets back home, he’ll toss a handful of gold teeth into a garbage can. Just so we get the picture — Vaughn is a bad-ass. To quote Joss Whedon, “He is not the one with whom to fu*k.”

I noticed when Vaughn attacked the gangster, he went right for the eyes, trying to gouge them out. Casper was found eyeless. And so was another victim found in this episode. This looks like a modus operandi connecting the victims. Is this eye gouge a hint.

Did Vaughn murder Casper? Or am I still reading way too much into this. 😉 Also, removing the eyes suggests a motive: they saw something they shouldn’t have.

Oh, one more tidbit. If Vaughn shot Farrell last episode, maybe it was a warning. The riot shells could be deliberate. After all, Vaughn wants Farrell for the new Sheriff — because he wants to control this position of power.

Meanwhile… Farrell’s brush with death urges him to visit his father… Fred Ward from the opening sequence. What? So, it’s clear that was a dream and not limbo. Farrell brings a bag of medicine for his dad. After he rolls up, they briefly talk about the dream.

Farrell also visits with his ex-wife. She’s been questioned by the police. They’re building a case on Farrell. She warns him to leave town. She offers him money to not appeal custody of their son. Farrell won’t give up on his boy. Even if he’s in danger from Internal Affairs, murderers, or Vaughn’s blackmail.

By the end of the episode, Farrell and McAdams continue to track down the call-girl from Casper’s phone records. While they’re interviewing someone, they hear an explosion. Their car has been torched. McAdams pursues the masked suspect in a full-on POINT BREAK foot-chase. She makes a great action hero. Do we have the next Linda Hamilton here?

This sequence was energetically filmed. It boils with intensity. The wounded Farrell lags behind, but saves McAdams from a rushing truck just in time. Unfortunately, the suspect gets away.

Each storyline on TRUE DETECTIVE is just complex enough. These characters are multi-dimensional with hidden motives. Each episode, we learn a little more about these fractured people. Each episode, the mystery builds even more. This tangled web is worthy of your participation.

This is bleak subject matter, to be certain, but it’s also the most intriguing cop show out there.

Forget the weekly procedural, TRUE DETECTIVE has a super compelling case that takes a season to solve. 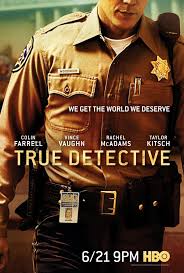