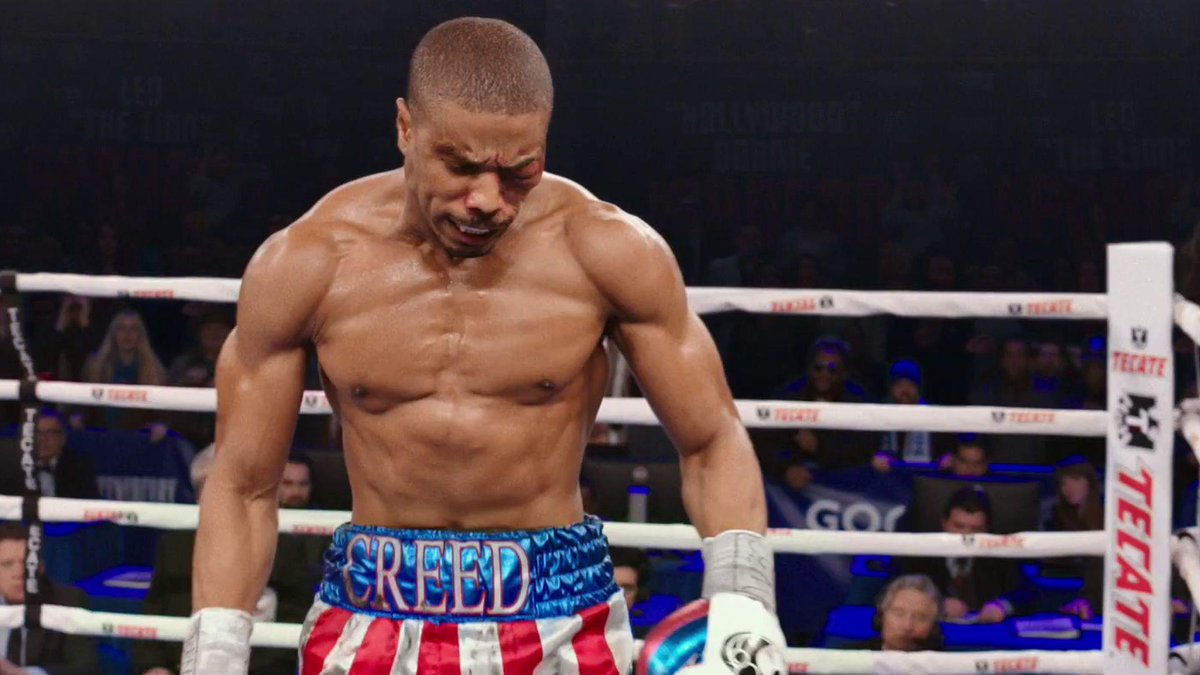 This quote comes from MICHAEL B. JORDAN in CREED, the latest movie in the ROCKY universe.

Jordan plays Apollo Creed’s son. His father died in the boxing ring, leaving behind a son who will grow up alone. This quote isn’t just talking about boxing, it’s talking about life.

CREED looks like a return to form for the ROCKY franchise. With the amazing young talent of Jordan and director, Ryan Coogler (helmer of the criminally underrated indie FRUITVALE STATION, starring Jordan), and the legitimacy of the returning SYLVESTER STALLONE, the highly anticipated CREED could be one of the best ROCKY movies.

It’s easy to forget how good the original film was. It was an Oscar nominated sports film full of emotion. The sequels with Apollo Creed were great as well. Thankfully, CREED looks to be inspired by Stallone’s masterpiece of the genre, replacing Rocky with Creed as the underdog.

For more on Jordan, Coogler, and FRUITVALE STATION (my pick for best film that year) please check out my earlier CREED article detailing their history, as well as the power of this sensational movie.

This new trailer wisely saves showing us Stallone until the end. This decision allows the audience to get connected and care about Jordan’s character first. There’s no doubt the movie focuses on the young Creed. This is Jordan’s movie. Stallone co-stars as Creed’s trainer and mentor.

By focusing on Jordan, cynical viewers won’t automatically dismiss this film. I fear if they showed Stallone up front, a lot of people would roll their eyes. With a build-up, die-hard fans enjoy the power of the Stallone reveal at the end of the trailer.

The CREED trailer begins with the camera behind Jordan, as he prepares for a match in the locker room. Ominous and muffled sounds of the crowd leak in. Next, he begins to punch at the wall in this dingy room.

An event poster for the night’s match doesn’t display Creed’s name. He’s not a title bout boxer yet. We will watch him evolve from low-rent fighter, to pay-per-view prize fighter, under the tutelage of Stallone.

The training montage stuff with his earlier trainer (also from HBO’s THE WIRE, like Jordan) was rhythmically edited to the beat of the music. Sounds of tape ripping, punches landing, accentuate the rhythm. CREED looks to be stylish as well.

During this section of the trailer we also meet Creed’s mother (played by COSBY SHOW mom, Phylicia Rashad) and his girlfriend (looking like Lisa Bonet from the COSBY’S).

It seems like CREED will focus on character, and emotion, just as much as boxing. This is essential in getting the audience to enthusiastically root for the underdog.

Two big-time hype moments for me were the original American flag shorts brazened with Creed’s name, and that final shot of Jordan running down the street in slow motion. This combination of nostalgia, anticipation, and actor’s performance is stellar.

Jordan is a triumphant young talent, ready to blow up. The man can act. Plain and simple. Watch that final shot again and pay attention to his expression. Jordan is so intense, boiling with rage, ready to burst. You can tell this character has some personal demons in need of an exorcism. Perhaps, this is something Creed has in common with Rocky? They both must overcome what happened to Apollo decades ago. The introduction to Stallone’s Rocky was rather intriguing. Jordan visits a bar / restaurant (owned by Rocky?), talking of his father, “I heard about a third fight between you and Apollo behind closed doors. That true?” Rocky is perplexed, “How do you know all this?” Creed replies, “I’m his son.”

I imagine it isn’t long after this introduction that Rocky starts training the young Creed. There’s a great moment of dialogue, as he points to their reflection in a mirror…

With well-written dialogue, a compelling underdog story, phenomenal casting, and impressive directing, CREED has a real chance at getting rid of the bad taste those ROCKY sequels left behind.

This new film reboots the franchise, while paying respect to the original. It also doesn’t feel like a cash in product, but rather a natural progression of the franchise’s storyline.

Behind the Scenes on FRUITVALE STATION… Coogler (director of CREED as well), with Jordan

Are you excited by the casting of Michael B. Jordan and the new direction of this ROCKY sequel?

Are you happy Stallone is involved with this project? And NOT as a boxer?