Influential 13th Century theologian and philosopher Saint Thomas Aquinus had something to say about pride and ego.

Nomi is the main focus this episode. In the series premiere, she was boldly introduced rolling the sack with her girlfriend (Freema Agyeman from DOCTOR WHO).

This time they attend a Pride event. This happy couple is having a blast until—

— Nomi notices someone strange in the crowd while taking pictures. The mysterious man from the Sensate’s visions – Jonah (Naveen Andrews from LOST).

Dazed and confused, Nomi passes out from the shock.

She awakens in a hospital. Where we not only learn that Nomi has some sort of brain issue concerning dual frontal lobes, but we also discover that our hero is transgender.

We meet her viscous mother during this sequence. She refuses to call Nomi by name, insisting on referring to her son as Michael.

*the following review is intended for a MATURE audience*

Transgender is a trending topic in the media now-a-days. SENSE8 bravely incorporates this character element because of the Wachowski’s personal experience, not to hop on some sort of bandwagon. Despite being science fiction, this is a personal story.

Thematically, the idea of being trapped in the wrong body is appropriate for this compelling new series. Some philosophies posit the self is a false construct.

SENSE8 demonstrates these heavy themes while keeping us entertained with a compelling mystery and creative action sequences.

Our other Sensates, like a male cop walking through life as a female DJ, experiences reality as a different gender. The supernatural ability parallels reality and our understanding of the material world. SENSE8 uses empathy with unlikely characters to great effect.

By spending time with Nomi, the audience effectively walks a mile in her shoes creating a strong and emotional bond.

Back to the story… Nomi is forced to stay at the hospital. Her mother thinks she can cure her daughter’s transgender identity somehow. Furthermore, she thinks her daughter is crazy.

Nomi even entertains the idea. Was she hallucinating earlier? Did she really see Jonah?

Before we get to answers with this storyline, let’s briefly examine what’s happening to some of the other characters.

In India, the bride-to-be Kala’s husband is introduced. I assumed she was hesitant about the marriage because it was arranged and she had no say in the matter.

However, he seems like a nice guy. He even went through the trouble of choreographing a Bollywood dance number for her and preparing a large feast. It makes me wonder what’s really going. Why doesn’t Kala want to marry him?

This is another one of those clear-cut examples of senses crossing over between our Sensates. When Kala craves a certain dish in India, so does Wolfgang in the UK. 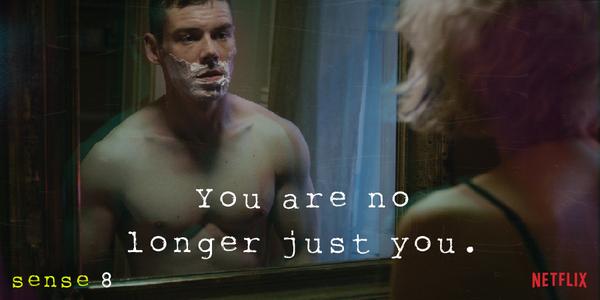 Also in the United Kingdom… Riley, our renowned DJ, stares in the mirror. Somehow, her reflection is the cop from across the pond. They both experience the same event.

Since it’s early on, these characters have no idea what’s going on. They don’t know what the audience does. When Jonah magically appears and no one else can see him, these Sensates assume they’re hallucinating.

It’ll be interesting to see how these characters discover their abilities and their common mission to save the world(?).

from the pilot episode

The cop, Will, has a flashback to when he was younger. Turns out he was a street thug, constantly getting into trouble. His father (played by Wachowski alumni Joey Pants a.k.a. Pantiliano) has stern words of advice.

Now that his son is grown and a police officer doesn’t mean his advice stops. Later on, Joey Pants reaffirms our worst fears regarding the young shooter Will saved: What happens if that kids kills someone one day? Pants doesn’t dance around the subject, he firmly states, “It’s on you.”

Later, Will begins to assemble minuscule pieces to the puzzle of the WTF Sensate experience. He examines CCTV footage to figure out what happened in that abandoned building of his haunting vision.

He tries to convince his partner. They watch the tape, but it’s been erased at an integral moment. The timecode just skips ahead, perfectly concealing what really happened that night.

Finally, Jonah appears to Will, acting all Obi Wan. He tells him what’s up. Will doesn’t get too far before Jonah conjures his character Sayeed from LOST and gets into a fight.

A car chase ensues, where Jonah magically hops in and out of the car. Will says, “I must be loosing my mind?” Jonah reappears, “No. It’s just expanding.” With the senses crossing, Will also hops around experiencing the car chase from both vehicles. This was one of the most creative car chases I’ve ever seen – for its concept and for excitement.

This strange and unique concept makes me wonder if these people share senses, do they also share a soul? It begs the question what is the soul? Is SENSE8 saying we are all part of a shared soul?

This series could be commenting on the idea of a collective consciousness. That is, all minds are connected. We are all one. So, if the physical senses are connected, are our souls as well? Is the brain an organ who’s ultimate function is consciousness? Is the ultimate goal to realize this shared connection? Is the ultimate effect of expanding awareness literally seeing through another’s eyes and walking a mile in their shoes.

At least this series makes you continue to think once each episode is over. You certainly can’t say this SENSE8 is mindless entertainment.

Okay, back to the storyline… again. Let’s finish off with Nomi.

Jonah is wanted by the authorities. We’ve seen his image on the news. So we know Nomi wasn’t imagining things. However, once he appears to Nomi in the hospital she doubts her sanity again. She thinks of the brain scan and her earlier diagnosis. Jonah comforts her, “Listen to that voice.” Nomi has to find a way out of this hospital. Cue the phonecall… Her girlfriend says Nomi’s “crazy bitch mother” kept her out of visiting. Nomi is relieved their relationship isn’t over.

Her girlfriend also has pictures of Jonah on Nomi’s phone. Proof he’s real.

And it gets even better than that, as this DR. WHO Companion saves the day. She threatens to “burn this building down before anyone touches that beautiful brain.” Well, she follows through ’cause smoke is rising.

Nomi and her lover break free. Ready for the real adventure to begin.

Each character is sure to have their own breakthrough moment. A real epiphany. How long before all Sensates realize they share a special connection? How long before we realize for what purpose?

SENSE8 is just complex enough. It balances confusion with revelations. It encourages us to participate. Each viewer is bound to connect with or enjoy any given character. There are a lot more storylines brewing than I mentioned.

This episode’s focus on Nomi was incredibly intriguing for several thematic reasons. I’m thinking upcoming episodes will focus on different characters, giving each one a moment to shine in the spotlight.

There’s a massive story building here. A story worth participating in.