HUGH GRANT stars as an award winning screenwriter who’s career is on a downward trajectory. To make ends meet he reluctantly agrees to teach screenwriting at a small town university. THE REWRITE is a non-traditional coming of age (mid-life crisis style) story of second chances mixed with romance and aspirations of the underdog.

Grant is charming per usual, in a self effacing sort of way. Initially, his character believes writing can not be taught. It’s a creative art, and you can’t teach art. He assembles his class based largely on how attractive they are. The end result is a mostly female student body – emphasis on body. I guess when he’s in class, he wants a good view. His chauvanism will be trumped once he sees his students progress in the art and gets in trouble with the teacher’s council.

The conflict arises from his boss, played by ALISON JANNEY, a huge Jane Austen fan. Grant immeaditely gets on her wrong side by dismissing all of Austen’s work. Once Grant starts a relationship with a much younger student it jeopardizes his position at the University. Of course, Janney is hot on his trail. He’ll need to remedy the situation later or be fired.

Some of the best parts of THE REWRITE are when Grant interacts with an older student (the captivating MARISA TOMEI) trying to better her self to provide for her daughters. She pushes Grant’s buttons. She approaches rebuilding her life with optimism, while Grant is cynical and negative. Tomei insists writing can be taught, continually reinforcing this idea to Grant.

Eventually, Grant comes to know and love his students. He builds real relationships with them. He takes one of the few males under his wing as his pseudo-apprentice. Grant helps the writer pitch his script to Hollywood producers, genuinely believing in his talented pupil. By the third act, Janney’s character confronts Grant’s delivering an ultimatum. 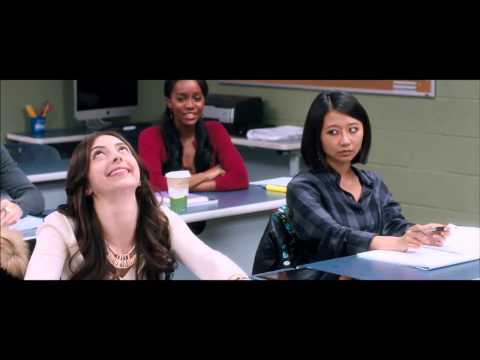 Each of his students have personality. This isn’t DANGEROUS MINDS or STAND AND DELIVER, this is more akin to DEAD POETS SOCIETY – albeit much lighter. We have the rich daddy’s girl who forms a relationship with Grant, the celebrity obsessed fan/writer, the cynical film elitist, and the STAR WARS nerd. These characters all have their own mini-arcs with mini-goals.

J.K. SIMMONS and CHRIS ELLIOT round out the ensemble cast. Simmons gives a few laughs as a fellow instructor on the teacher’s council. He’s the typical family man, with all daughters. His health is constantly monitored by them. He’s stuck watching chick flicks with low-fat popcorn. He also cries at the tip of a hat. Photos of his children guarantee the waterworks.

Meanwhile, Elliot plays Grant’s awkward and neurotic neighbour looking for love in all the wrong places. His idea of wooing a women is quoting obscure Shakespeare dialogue to sound intellectual. These two help Grant deal with the small town life and the teacher’s council. And Grant helps them in return with their personal lives.

In between the laughs and light romance, we have a genuine heart. The movie’s title acts as a metaphor for changing your life, essentially rewriting ourselves. Tomei is the clearest example of this allusion. She’s a single mom working several jobs to raise her young daughters. She’s almost given up on her dreams of dance, but she still shares it with her children. An injury stopped this pursuit, but she turns to a new aspiration to express herself through writing in order to connect with others.

Grant’s rewrite includes climbing back up the Hollywood ladder by outlining a cash-in sequel to his most famous screenplay. He’s not driven to express himself, like earlier with the original Award winning script. That’s part of what fuels writing – writing what you know and expressing how you feel about something. He could write about a writer turned professor. Or something more personal like Grant’s estranged relationship with his son.

The performances are impressive, an essential ingredient in a character piece. Grant traverses his character arc with believability. He has flaws, but we watch his revisions, as he dashes cynicism for optimism. I ended up really liking and rooting for his character.

I admitedly dismiss a lot of romantic comedies. I’ve dismissed a lot of Grant’s earlier stuff like 4 WEDDINGS and MUSIC & LYRICS, but his excellent work here makes me want to reconsider these biased dismissals. Grant is a romantic lead I could actually relate too. He wasn’t the Harlequin Romance hunk du jour.

Marisa Tomei is his counterpart. She’s entirely lovable and severely relatable. Her motives are clear. She’s the underdog here. Her performance avoids schmaltz. She rips apart the constrictions of the genre, rising above the manipulative stereotypes of the romantic comedy into the stratosphere of sincerity and relatability. Tomei is genuine and undeniable as the underdog / love interest / motivator.

While I’m not familiar with too much of Hugh Grant’s earlier more prolific work, I rather enjoyed THE REWRITE. The multi-dimensional characters and tremendous heart balance nicely with the comedy.

Let’s get this straight, THE REWRITE is a comedy. There are tons of laughs. I don’t usually watch romantic comedies because they tend to be melodramatic and cheesy. Thankfully this isn’t the case here. While not ground-breaking, I really enjoyed the story and the characters here. From top to bottom, this film was just purely enjoyable. 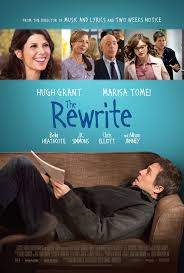 4 thoughts on “THE REWRITE – revising life & love… with cynicism”