There’s another ROCKY movie on the horizon. Well, sort of. Actually it’s much more intriguing than it sounds. CREED tells the tale of Apollo Creed’s grandson following in his footsteps. The most compelling bit of news is the casting. MICHAEL B. JORDAN plays the young Creed. He is one of the most talented young actors out there. No doubt.

I’ll get into the intriguing new story news for CREED soon. First, some context for why I’m looking forward to yet another ROCKY movie. You might be surprised it has little to do with the previous movies in this franchise. It has more to do with the youngbloods involved. I’m talking about the actor and director team involved. Let’s get into the acting first…

Pop culturists might recognize JORDAN from THAT AWKWARD MOMENT where he shared the screen with MILES TELLER (he of WHIPLASH fame). That’s before they teamed up for the anticipatory re-envisioning of FANTASTIC FOUR. HBO fans might recognize him from the best television series ever: THE WIRE. Or you might remember him from the underrated RED TAILS – the story of Tuskegee Airmen at war with the enemy and inequalities of their home country. 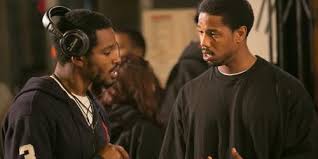 Cinema purists will recognize him from his brilliant performance in last year’s FRUITVALE STATION – my pick for best film of 2014. In fact, Jordan re-teams with his DIRECTOR (RYAN COOGLER) of that hidden gem for CREED. I eagerly look forward to what they do with their second effort together. This combination of talent is why I don’t dismiss yet another movie in the ROCKY universe.

NERDY DIGRESSION 2000: For those of you unfamiliar with FRUITVALE, it’s an emotionally riveting portrayal of real life tragedy. A young man was killed by cops in a subway station on New Year’s Eve. The most shocking elements are that Jordan’s character was innocent of any wrong doing, was compliant with the police, was handcuffed and laying on the ground when he was shot dead. This TRUE STORY was caught on camera by subway passengers.

Unfortunately, as recent events in FERGUSON and NEW YORK demonstrate to us, we STILL need a change in our ideals. These police should probably be imprisoned. Obviously, this injustice needs to stop. A lot of us have been saying this since the LA Riots in the 90s: “No justice… No peace.”

FRUITVALE filmed in the real location, the actual subway station where the bullet is still embedded in the floors. They filmed right there. On that very spot. The movie will rock your soul. The performances are stellar. Heart-wrenching. The directing is surprisingly visual and metaphorical. A standout scene involves Jordan helping an injured pit-bull in the streets. I interpret that as the way a racist looks at a young Black man: a pit-bull waiting to snap. It might look friendly, but it will lock its jaws around you and never let go. So what does Jordan do when he sees the pit-bull? He approaches it and helps it, as it lays bleeding on the ground. A haunting parallel to what happens to him later that night.

I mention the above digression because it greatly informs my excitement for the release of CREED. The creative team behind FRUITVALE reunites for this ROCKY spinoff. I was expecting their next team-up to be another personal independent film. But instead we get a big time movie that could be the next blockbuster surprise in Hollywood.

Now… Back to the main show…

First off, SYLVESTER STALLONE returns. This is the question on everyone’s mind. Quickly chased down by the next… Will he step into the ring again? I think that dream is over. We’ve had our ROCKY movies. They earned their place in cinematic history. Now it’s time to continue the story. The arc of the Rocky character will reflect the original film from the late 70s. In that movie, Rocky’s coach was integral to his training and inspiration. Events come full circle with CREED as Rocky coaches the young Creed.

It looks like Rocky will battle his age this time around. His memories are fading as he battles the effects of dementia. This could be the most emotional fight Rocky has encountered in all these movies. I’m expecting his memories of Apollo will fade as well. For the young creed (Jordan) this will be heart-breaking. He’s never known his grandfather. He’s only heard of the legend and watched the highlights on ESPN. The best stories he hears come from his grand-dad’s old friend and ally and adversary. When Rocky’s memory fades, so fades his grandfather.

I’m not sure this is what WILL happen in the movie. I’m assuming this is territory worth exploring, however. And it’d be nice to see everything tie together thematically. In a way, Rocky and Creed both fight to keep the memory of Apollo alive.

Rocky’s memory loss parallels the sad repercussions faced by many a modern athlete. The NFL has had its fair share of controversies in recent years. One of the most significant is the effect on its players’ health – more specifically their brains. With more and more athletes donating their brains to science, we are learning of a lot more dangers athletes face in rough sports like football and boxing. You don’t have to look too far for evidence, unfortunately. In the boxing world, you might think of how Muhammad Ali was affected. If you’re interested in this topic of concussions and such keep your eyes peeled for several upcoming movies about the subject matter – one of those will star WILL SMITH.

So not only did Apollo Creed lose his life to this violent and dangerous sport, but now Rocky is also loosing his life (ie: memories) – slowly bit by bit each day. I feel like this idea is ripe for emotional exploration by the creative team involved. I’m sure we’ll have a soul shattering moment between Jordan and Stallone the equivalent of a heavyweight fight. A lot of folks dismiss Stallone’s acting abilities. But given the right character and the right story, he delivers. Look to the first ROCKY or something like COPLAND to remind yourself.

If ROCKY taught us anything, you never count out the underdog.

You speak, I hear…

Are you ready to see Rocky transition from in the ring to the outskirts as a coach?

How do you feel about MICHAEL B. JORDAN leading a movie on this scale? Did you see FRUITVALE STATION? What did you think about it? Did the director prove he can handle a larger movie like CREED?

Will this movie be taken seriously? Will the media scoff at it as a joke?

Or will it be considered for nominations come Award season next year?