Aminata’s journey from slavery to freedom continues. The fourth episode of the 6 part series detailed her travel to Nova Scotia, Canada. Sam (Cuba Gooding Jr.) does his best to help Aminata maintain her new found freedom. And Chakura fights to stay by Aminata’s side.

This episode of BOOK OF NEGROES was quite interesting because it showed another side to American history, specifically with its examination of George Washington. That’s right, Washington appears as a character in this historical mini-series. Here, he is painted as a man who fights for freedom of his country’s citizens, so long as they are White. Aminata confronts him directly asking how a country who owns slaves can be free.

Now that the war is over, the English follow through on their promise with slaves who fought for their cause. These men and women are guaranteed freedom in the British colony of Nova Scotia. Aminata is favoured for her book-keeping skills and hired to inventory those arriving in Canada. She keeps the historical BOOK OF NEGROES. She is to write down the names and skills of the recent arrivals.

These moments are actually quite powerful. Some of the slaves are so delighted and truly happy to have their names recorded. It’s proof of their freedom, but also proof of their identity. The most touching moment was when Aminata meets another Aminata – the baby she delivered on the ship to America (and named after her). It was so emotional to see this event come full-circle. They both were enslaved, and now both are free.

Well… almost. Just as Aminata reunites with her husband, Chakura, and boards a ship for Nova Scotia she is stopped by the boat’s captain. Her name is on a list of stolen property. I yelled at the screen. She was so close to starting a new life… free. Now that her freedom is threatened I was horrified.

Her South Carolina owner who abused and raped her has returned to claim what is rightfully his according to American law. The way he frames his argument is that he merely loaned Aminata to the French employer. Sam tries his best to find papers that prove the Frenchman is the rightful owner. The clock is ticking. Aminata is sent to a jail-cell left to rely on Sam’s help. The courtroom conflict has a dramatic resolution (that I will keep spoiler free). It was unexpected and emotional.

By the end of this episode, Aminata must decide if she should stay in New York with Sam or hop on another boat and head to Nova Scotia for a reunion with Chakura. The relationship between Sam and Aminata is a tender one that borders over friendship. However, her past is so closely rooted to Chakura that this choice is not an easy one.

One of the elements I appreciate with BOOK OF NEGROES is the glimpses of hope against such darkness. When our characters are faced with such staggering odds it’s hard for us to imagine them bettering their situation. We nearly give up hope… as viewers. It really begs the question: what would it feel like to be there? How could you maintain hope as a slave? When the world seems to be against you, how do you possibly prevail?

As dark and depressing as this mini-series may get it never loses sight of hope. Each episode focuses on a moment of humanity. This episode it was the idea or concept of a name / identity. These people were ripped from their homes and sold as property. They’ve been stripped of their humanity. They’ve been forced to become something else entirely. Their world is flipped upside down. When they get a reminder of home, they are given hope. It must be hard to remember who they truly are, but someone like Aminata reminds them of their true identity. No matter how hard the White man tried to erase their past, they weren’t successful. The past although intangible is clutched tightly in their grasp.

When Aminata records their history for prosperity in the Book Of Negroes, she gives them back their past. Their life returns. An ancestor 100s of years later can look at this book and discover what happened long ago. Because of a book like this, their past is NOT erased. Generations to come will have this same courtesy. They can learn where their distant relatives were stolen from, and they can return to their ancestral home. In a way, they can visit their family. Those bloodlines that weren’t forced into slavery would be more genetically similar. They can look at the faces of their ancestors.

If there were no ledgers like Aminata’s there would be no record of the past. It’s this sort of monumental idea that is merely hinted at in BOOK OF NEGROES. It’s subtle enough that it brews within the viewer until they realize the gravity of the scene and its context to real life history.

This mini-series touches on so many moments each hour that it helps to consider what is going on underneath the surface. It helps for us to reflect on history. What could easily be confused as a soap-opera-like romance is really a historical drama spanning several decades.

BOOK OF NEGROES focuses on the country as much as its slaves. We are forced to examine how slavery could exist in a country fighting for its own freedoms against the British. How could early Americans be blind to the hypocrisy?

I really appreciate how this mini-series sparked this internal conversation / debate within. I hope every viewer walks away with a similar experience. Entertainment is at its best with it illuminates our understanding in a different way. For me, BOOK OF NEGROES accomplishes this amazing feat each week. 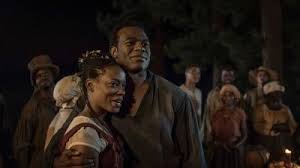 Are you looking forward to the pen-ultimate episode on Wednesday?

What do you think of LOUIS GOSSETT JR. returning to the screen next week, decades after he appeared in ROOTS?

What did you think of a non-American (ie: Canadian) version of American history? Is it different than what you may encounter in textbooks? 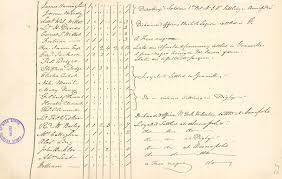 What did you think about the inclusion of the real historical BOOK OF NEGROES?

Are you finding the mini-series controversial?

What do you think of the performance by ANJANUE ELLIS? Is Aminata JUNO bound?