‘Tis the season… The first Holiday Movie I’m showcasing is the cult classic GREMLINS. Some parents avoid showing their children this movie, thinking it’s too violent and scary. But as a child, I loved this movie. I actually had a lot of fun with it. I still do. Oh, and it has a heart.

The 1980s were a great time for family movies. They didn’t seem to talk down to their younger audience. They were exciting adventures for the whole family. GREMLINS is no different. Not unlike other 80s flicks, this one has an important message. There are complex themes brewing under the surface. As a child, this movie helped me realize that when you get a new pet you get a lot of new responsibilities. 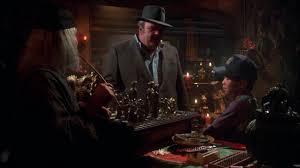 GREMLINS starts with a family man trying to peddle his shoddy inventions. He stumbles into Chinatown and discovers something that will make a way better Christmas gift than any toy. He finds a strange creature known as a Mogwai. His name is GIZMO. And ever since I set my eyes on him, I wanted a pet just like him. 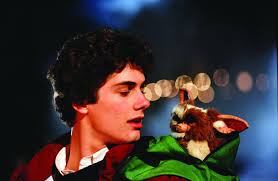 This new pet comes with a set of instructions – or rules – that must not be broken. Every 80s kid remembers them fondly too. “Don’t feed them after midnight. Don’t get them wet.” The repercussions for not following these rules are very steep. And since this is a movie, each rule gets broken in a fantastic way.

Accidents lead to transformation. Gizmo gets wet, his body trembles, something strange bubbles underneath his skin. Suddenly, little creatures erupt from his body. These fuzzy little balls of life tumble into reality. More Mogwais. And they all have mischievous little personalities. 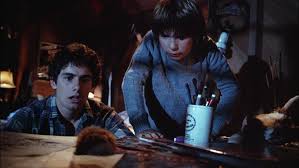 Corey Feldman has a small role here… Before he was a GOONIE.

Like any pet, they can be rather inquisitive. They find some fried chicken for a midnight snack. Whoops. Midnight?! These cuddly little Mogwais undergo another transformation – this time, much more unsettling. Thankfully, Gizmo didn’t have the munchies. 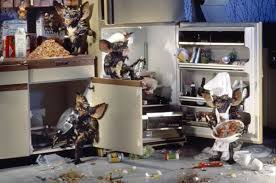 I hope you wanted scrambled eggs for breakfast

These Mogwais enter a sort of cocoon hibernation stasis mode. By the morning, the pods have hatched and GREMLINS are born – scaly monsters who love to destroy everything. The scares come from these creatures and how they terrorize the citizens of this small town.

STEVEN SPIELBERG produces this film, assuring it is entertaining for adult audiences as well. While it’s not as whimsical or emotional as E.T., this is another quality family film. CHRIS COLUMBUS wrote this before he wrote THE GOONIES and directed HOME ALONE and HARRY POTTER. There is that same sense of mischief and fun as those amazing cult classics. The music is also a real stand-out from legendary composer JERRY GOLDSMITH. 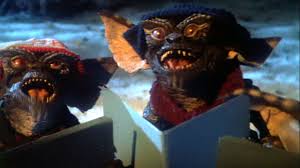 These are the type of Carolers you slam the door on.

The director, JOE DANTE balances several tones from horror to comedy, and keeps the energy up the whole runtime. His visuals are also top notch. He stages each event, mounting tension when appropriate. The Gremlin attacks are all creative. There are so many visual gags to balance out the possible horror. Let’s call it gooey splatstick.

Too scary? Come on, kids today watch orcs get decapitated in LORD OF THE RINGS.

When this movie hit the theatres, it was marketed as the next E.T. Parents expected a nice night at the movies. GREMLINS was released before the PG13 rating existed. This might have helped warn everyone what was in store. In Canada it’s rated 14A. This is the same rating most American Rated-R features get here. So, I wouldn’t agree with that. It makes this family film SEEM like an R-rated horror full of blood and guts.

This movie has heart too. I don’t think any kid leaves this movie NOT wanting their very own Mogwai. If they were real, I’m sure children would be begging their parents, “I promise, Mom, I’ll follow the Rules. Just let me have one. Pleeeeease.” But I digress…

The special effects were a real draw to me. I love the puppetry on display. For me, I much prefer these sorts of practical effects. You know these creatures are on set. The actors actually react and perform with them. They seem real, because they are. If GREMLINS was made today these guys would all be Computer Generated graphics. There would be no restraint. The filmmaker would show everything possible, and therefore remove some of the imagination and playfulness. 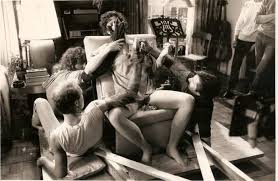 behind the scenes with puppeteers = movie magic

DANTE had to film around the limitations. Like Spielberg did with JAWS, you can’t always show the monster because it wasn’t technically possible. The end result is building up a scene, through suggestions and careful photography. The atmosphere is thus much thicker and more palatable. The viewer uses their imagination to fill in some of the blanks. 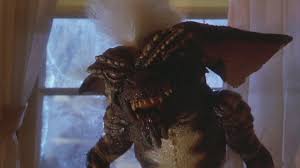 Movies today go so far over the top, inundating you with way too much visual information. There is no focus. The entire screen is filled with details. Gone are the compelling set-ups of intriguing lighting and specific camerawork. The magic dissipates with CGI. 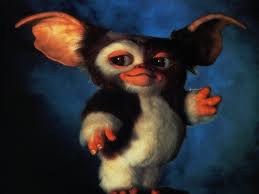 One of the best parts of GREMLINS is knowing these guys are real. You can own the toy, and it will look exactly the same. You can appreciate the artistry operating behind the scenes. These elements actually add to your enjoyment – even if it’s subliminally.

While this may not be the ideal Holiday movie for everyone, I have very fond memories from watching this as a child. If you explain to your kids that these are all special effects, like toys, I feel like they can handle this form of entertainment. It’s just about as scary as LORD OF THE RINGS or HARRY POTTER.

What do you think? Is GREMLINS the best holiday movie from the 80s?

Do you still want your very own Mogwai?

Could this movie exist now-a-days?

Oh, and I forgot to mention PHOEBE CATES. Um, remember her? FAST TIMES at RIDGEMONT HIGH anyone?! Yeah. Her. 😉 Her Santa story was so haunting and creepy as a kid. That’s probably the scariest part of the movie.