The Independent Movie Award season is just beginning and UNDER THE SKIN is getting quite a few nominations, including Best Picture. Which made me realize I wasn’t the only person to like this artsy piece of cinema. SCARLETT JOHANSSON stars in this cerebral mind-mending sci-fi drama. This movie is just so compelling on so many levels, from the story-line to the rich subtext.

The focus here will be on deconstructing the subtext. These will just be my personal interpretations. I haven’t read any reviews or researched or anything. I saw the movie once months ago – to preface. There will be adult content within. I will emphasize on thematic content, but there will also be analysis of imagery more suitable for a mature audience.

I really believe this movie intentionally urges us to participate and actively co-create this fiction. We are supposed to be confused. We are supposed to search for answers. Well, if that’s what you’re here for, you’re in luck. I’m about as nerdy as it gets.

Let’s start with the idea that Scarlett is an alien. We don’t know why she’s on Earth. Is she gathering resources? Is she forced to do this? Is she stranded here? All we know is she isn’t alone. There is another “alien” supervising her mission (maybe as her protector?), or observing her behaviour. Or perhaps, tracking her down? Regardless, she now looks like a human, and she’s on the prowl.

Scarlett drives a van through Belfast(?). I assumed she was looking for a mate, like the 90s flick SPECIES. She picks up young men and seduces them, one after the other. She lures them into privacy with the promise of sex. These men enter some sort of VOID. 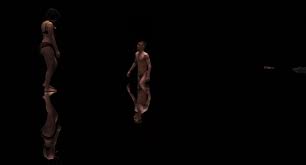 Maybe this area of complete darkness is Scarlett’s alien ship? Or perhaps it all is a mental representation, and these unsuspecting men are “dreaming” it? The end result is what matters, they follow her, descending into some sort of “stasis pool”(?) 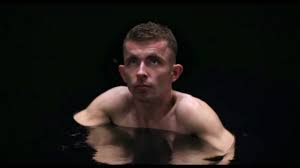 I’m assuming her species observed humans from afar. They see the harm humans cause. They know the planet is dying. They set out to gather resources while there still are some. These men realize they could spend a night with Scarlett, and she takes advantage of them. They are, in effect, trying to consume her. Or ravage her in bed.

She thinks all men (or humans) are like this. She doesn’t hesitate to transform them into gruel for her own consumption, or fuel for her ship’s consumption. We see this pulpy viscous material transport along a trough of some sorts, making me think of the resource analysis. 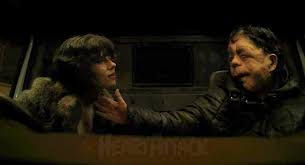 Scarlett’s ideals shift, as she realizes she may have been fed propaganda by her race. She picks up the next victim, a man with deformed facial creatures. A gentle man who doesn’t want to consume her. He seems innocent to her. I wonder if upon consuming she gains their experiences? Regardless, it seems like something causes a shift in her worldview.

Another impactful moment was when she witnesses mankind’s empathy at the stony beach. A dog paddles out in the waves, a girl swims out to rescue her pet. The girl has that much love for another animal that she would risk her life. Then the father repeats this process to save his daughter. 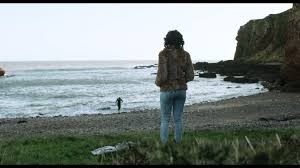 It is this observation of altruistic behaviour that forces Scarlett to rethink her opinion on humanity. They do care, they don’t just exploit and consume others. They don’t all kill for power. Some die to rescue another animal outside of their own gene pool. The girl has no genetic relationship to the dog, her bloodline will not end when it does. But she risks her life anyways. The evolutionary theory of “survival of the fittest”, does not apply here.

With these two dynamic events, Scarlett decides to cancel her mission of consumption, or resource gathering. Her assigned protector / handler follows her around. I wonder if his views are shifting as well, observing the observer?

She walks in the damp and the cold, until someone decides to pick her up. She hesitates with caution, is this another vicious man who just wants me for my body? He wants to help. He seems genuine. He shelters her and provides her with warmth.

Scarlett decides to sleep with him, assuming that’s what he wants. He is hesitant. Once they have sex, they don’t enter this nether-realm of the Void or artificial simulated reality. The man is not consumed or used as resources for her alien craft (or people on her home planet).

Scarlett in the VOID as she enters the skin – is this a visual representation of an inner world ?

While I entertain the idea that his consumption is for another, it seems like her body might be shutting down because she isn’t “feeding”. It seems like she is willing to make this sacrifice. It’s like she has a personal honour code. Or ETHICS. She doesn’t want to risk killing an empathetic being who has done nothing “wrong”. Even if it’s to her own detriment. She has observed altruism, and now she conducts it herself. 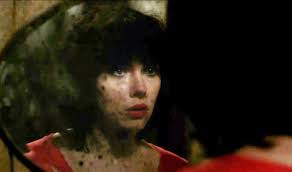 a hidden reflection, pocked with dust and dirt and other imperfections

By the end, she wanders the woods. Isolation. Seeking solitude to die? When a labourer (man) sees her in the woods (this nymph). He plans his attack. No one will ever know if he rapes her out in the middle of nowhere. He is exploitive. He is dangerous, despite the safety colours of his garb (skin). He will enforce his power over her. He inhabits all the qualities she was warned about.

the true reflection of humanity(?) … from a behind-the-scenes photo

What follows is so mind-bending I will not spoil it here. But we do discover what is UNDER THE SKIN. And not in a metaphorical sense. In a very disturbing reveal that still creeps me out. Depending on how you interpret the clues in the movie, the ending is yours. 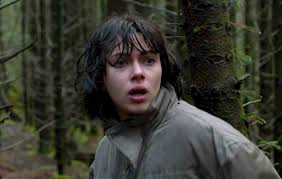 UNDER THE SKIN weaves a complex tale. I have only begun to scratch the surface, so to speak. I mentioned the story here. Scarlett Johansson’s performance deserves mention. Her acting was better than any other movie I’ve seen her in. She conveys so much emotion, with very little dialogue. She completely surpasses every challenge. I hope she gets to lead more mysterious dramas in the future.

understanding… emotion rather than exploitation

She bares all in this movie (um, and yes, in more ways than one). Actually, UNDER THE SKIN may be best known on the Internet simply as the movie where Scarlett Johansson does full frontal nudity. Which is a shame, because the scene is so much more than that.

Scarlett reveals all in this scene, it’s like she realizes the beauty of the human form. Or she understands why it’s so fragile. Her reflection induces wonder. It makes us imagine what she’s thinking. It’s as if she’s seeing herself for the first time.

the dark void that gathers light

From the image of darkness, the pupil surrounded by the flaming beauty of the iris – from the mind, the organ that processes the exterior world – to the exterior that interacts with the outside world, that manipulates the surrounding environment.

The performance and direction are so beautifully and poetically layered. This moment IS a moment for what’s going on UNDER THE SKIN. It is much more than the flesh. It is much more than a nude scene to be Googled. It is INTEGRAL to the story and our emotional connection to this alien character. She slowly becomes human. This is definitely not a cheap ploy like Halle BERRY back in SWORDFISH.

one example of the hallucinatory imagery – rich with subtext

The director, JONATHAN GLAZER, is also worthy mentioning. He’s made some amazing, like really phenomenal, music videos for artists like RADIOHEAD and MASSIVE ATTACK. He is such a revelation. His work definitely reminds me of STANLEY KUBRICK. Actually, I imagine if Kubrick was a young man now his first movie might just be something like this cult masterpiece.

the horriying result of void consumption – haunting and oddly beautiful

Glazer assembles a hallucinatory reflection on humanity. He films it with such amazing visuals. He shows restraint and never overdoes it. I can’t say enough good things about his subdued storytelling and visual metaphors. I eagerly anticipate his next feature.

Glazer implies just enough for us to participate. He lures us into the Void, just like Scarlett’s character. He blows away our expectations and forces us to re-examine ourselves. What does it mean to be human? 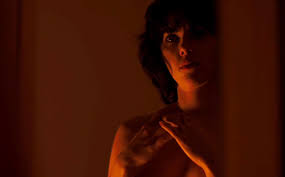 An amazing debut film that deconstructs our enforced ideologies. Who knows what is actually UNDER THE SKIN. My analysis here is simply one interpretation – from one nerd to another.

the hypnotic perfection of flawless beauty against the void

The beauty is, whatever answer you choose, this movie is YOURS. Every individual gets their own version of this story. This is what cinema is for. Participation is greatly rewarded in UNDER THE SKIN. 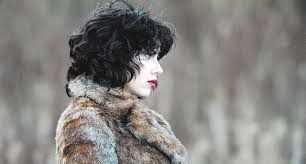 Whatever you do, DO NOT let this startling picture SLIP THROUGH the cracks.

Destined for CULT status? There is so much impressive fanart out there!

Pass it on to your friends, and enjoy the conversation afterwards.

What did you think about UNDER THE SKIN? Who was that other alien? What was his purpose? 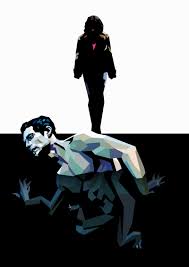 What else is Scarlett Johansson capable of? Or director Jonathan Glazer? 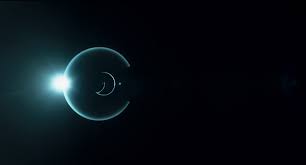 2 thoughts on “deconstructing UNDER THE SKIN”