Imagine a 20 year old HIT GIRL (from KICKASS) trying to get revenge for her slain father. INDIA EISLEY stars as SAWA, alongside SAMUEL L. JACKSON in this neo-cult classic action flick called KITE. As Sawa says, “They killed my family, so now I kill them, one by one.” Plain and simple. Thankfully, the visual imagery is anything but. What we have here is a blend between LUC BESSON (LEON: the PROFESSIONAL, LUCY) and FRANK MILLER (SIN CITY). We get martial arts fight sequences and stylistic action scenes with JOHN WOO levels of gunplay. We get dark humour with pun-based violence. We get a hard-boiled crime story fueled by revenge.

Sam Jackson’s character is a cop who used to be partners with Sawa’s father. He feels responsible for his death. Now that Sawa has grown up, he helps her avoid the law in order to get revenge. He helps her find the group responsible – gangsters involved in the sex trade of young girl. The plot gets a little more complicated but I want to avoid spoilers here.

KITE was just released on DVD on Tuesday. I’ve never heard of this Anime-based movie. I was pleasantly surprised. I don’t want to say it’s a B-movie, but it’s a lower budget genre picture. It has the gloss and shine of a larger budget. The visuals are hallucinatory at times. The electronic music is energetic. Everything just exudes style.

The action fully delivers, especially with a little bit of the good old ultra-violence. Jackson stumbles upon one of Sawa’s victims and jests, “Looks like someone used a land mine to clear their sinuses.” There are several massive headwounds, from explosive time-delay bullets to the old-fashioned bladed decapitation. Sawa infiltrates group after group, until she reveals the true source responsible. So we get several set-pieces of well executed vengeance. 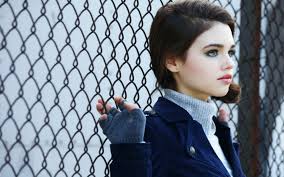 India Eisley was a revelation for me. I’m not familiar with her work. For me, at times she looked like a young KHALEESI (from GAME OF THRONES). She tosses rad one-liners while she kicks a multitude of ass. Look out Milla Jovovich and Chloe Grace Moretz. There was a variety of fights from balletic gunplay to martial arts.There was even some parkour chase scenes to devour.

Sawa (EISLEY) uses her beauty to her advantage. It’s her brains and brawn tnat ultimately lead to solving a deep mystery

There were so many cool moments, like a sex toy turned weapon that she bangs some gangster’s face with. Sawa is like Kurosawa’s SEVEN SAMURAI all rolled into one. There is just such a variety of messy carnage on display. And most of them are practical special FX rather than poorly spattered CGI blood.

Eisley also delivers on some of the more dramatic elements as she suffers from addiction to memory wiping drugs. She tries to kick the habit in order to solve the mystery of her father’s murderer. KITE portrays this is like a strange brew of MEMENTO and LSD. Part of the drug withdrawal side effects is sudden flashes of memories. She uses these clues to know where to go next. 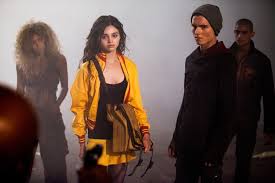 Sawa and her friend get surrounded by parkour baddies

She also meets a boy who may be linked to her past. I won’t ruin the surprises her, but I will say the movie gladly dodges the typical Hollywood romance angle. The focus here is on intrigue and vengeance.

The addictive drug, AMP, is administered with that strange syringe gun.

Samuel L. Jackson’s storyline involves hiding Sawa from his fellow police. He wants to see her enact her vengeance, but he doesn’t want her to get caught with the death toll escalating. He cautions her, “It’s an addiction you know.” Sawa replies, “I know.” Jackson reinforces, “Not the drugs. Your lust for vengeance.” He wants her to be careful, even if he allows her pursuit of violence.

Occasionally, the movie gets poetic. When Sawa is asked what her name means she recollects what her father told her, “A sound you couldn’t hear, like a feather blowing in the wind.” At first, her memories are like this silent feather, weighing nothing, but as her memories return these special moments of her past return with much more weighty significance. Now she NEEDS revenge even more.

This ain’t no syringe.

When Sawa finally confronts the responsible bad man he tries to threaten her with a truly frightening speech. Well, let’s say she fights back. The baddie says, “Do you really want to follow the same course as your father? Look where it got him.” Sawa doesn’t back down, she aims a retort right for him, “It’s genetic, I suppose.” 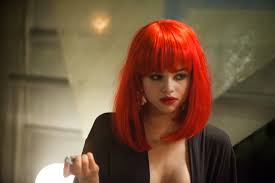 Sawa has more than one weapon at her disposal. Her seduction is lethal.

It’s rare to find that genre movie that delivers. You might assume if a movie’s good it will play in the theatre, you’ll hear all about it upon release, nothing will SLIP by you. Well, it happens. Even in the Internet age. 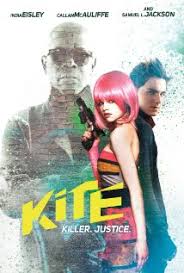 What do you think? Had you already heard about this one? Are you a fan of the anime? 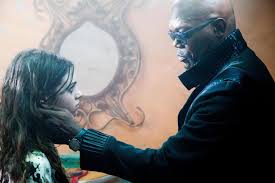 What other hidden gems do you love? Which ones deserve to be reviewed, or get more recognition? Did you like the performance of India Eisley? What would you like to see her do next? 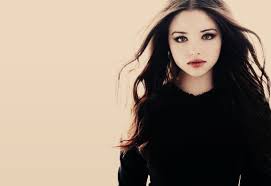 NERD CASTING 2000: If the real HITGIRL is up for JEAN GREY in the new X-MEN, why not INDIA EISLEY (whose Sawa is a pseudo-Hit Girl) ?